Paris menswear week was one filled with upheaval. Aside from the buzz surrounding the possible new designer for Dior womenswear and the shocking result of the Brexit vote, there was also the passing of the iconic fashion photographer Bill Cunningham. His death marks the end of an era for fashion and it reinforces the sense that the industry is in the throws of some fundamental changes.

With so much uncertainty in the air the catwalks became something of a bellwether of how people are currently feeling. Two strong sentiments could be sussed out. The first was a real rebellious streak on the catwalk with brands like Lanvin, Dior Homme and, in its own way, Balenciaga, proposing lineups that had a hint of anarchy at their heart. The other was more literal in nature with houses turning to the idea of camouflage as perhaps a sartorial protective device. At Givenchy, Riccardo Tisci transformed currency into camo and Louis Vuitton’s Kim Jones made mohair mimic the pelts of African animals.

But overall this Paris menswear week will not go down in history as a strong season. A number of big name brands looked a bit lost, which made room of the independent labels to shine more brightly. Three brands in particular had a surprisingly sunny disposition for Spring 2017, in stark relief to their usually more somber sartorial leanings. 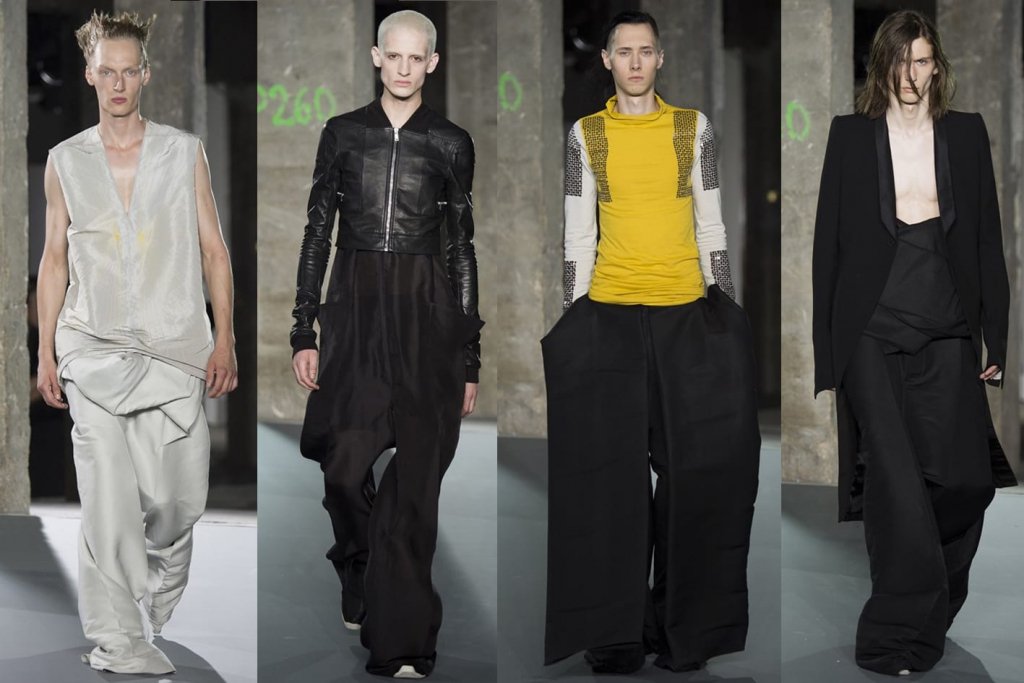 Rick Owens is the godfather of dark brooding collections that tend to telegraph an anarchistic energy. But in a season where that perspective was being explored by a number of other designers Owens presented a line-up that had a lightness to it, and a peaceful soul that felt like a soothing balm to calm fashion worries.

As the melodic tune “After the Goldrush” being sung by Neil Young filled the cavernous show space, Owens softened up his traditional layered design. Crafting his undulating outfits out of gauzy fabrics that enveloped and twisted about the models’ bodies and eventually pooled around them on the ground. So much so that even the cool new sock-sneakers that the designer created with Adidas couldn’t keep all the models from tripping from time to time on the catwalk.

The introduction of sunshine colors like yellow and orange along with cloudy white and sky blue were a welcomed surprise from a designer who hasn’t meet a shade of black he doesn’t like. They helped elevate and enhance the sensation that this collection was trying to rise above the fray. Even when Owens revisited more sober hues the addition of shimmering sequined sections on a cropped black leather jacket or beading bursting out like fireworks form the center of a sleeveless top continued to give this show a transcendent allure. 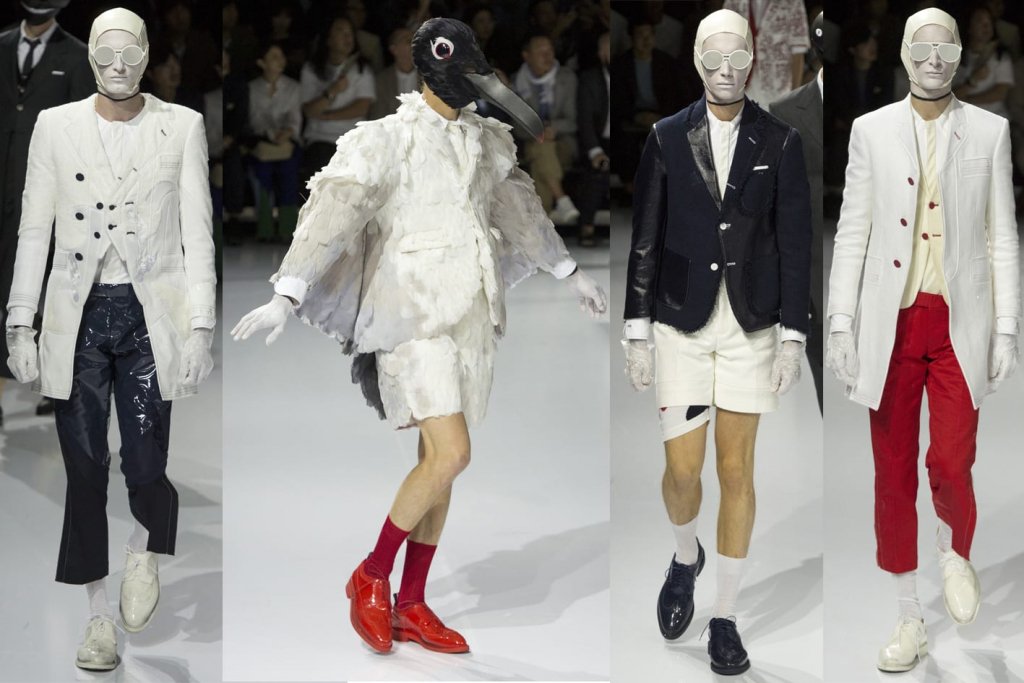 At the Thom Browne show, after asking for a minute of silence to honor Cunningham who had passed the night before, the designer presented a collection that argued the point that no man is an island.

In three fashion acts Browne proposed a layered (literally) collection that saw an army of male models in boxy outsized wetsuits, made to look like the classic gray suit that is one of the designer’s signature ensembles, line up around a central shimmering black sand island where stood a solitary palm tree. A model dressed with a shark headpiece and matching fin on the back of his suit circled the runway and a flock of feathered sea birds swooped back and forth (a tip of the hat to you, Stephen Jones).

Then those gray suits were shed to reveal a vibrant collection of tautly tailored outfits that featured jackets with shark motif embroideries, crop pants with side slits and onesies suits with the jacket, vest and paints painted into existence via the use of a bright outline in yellow or green. These were also unzipped and discarded to reveal the final looks, retro knitwear swimsuits in flower patterns with match footwear and custom-made Thom Browne long boards.

This delightfully cheery collection closed out the week on an upbeat note and left the audience smiling as they walked out to face an unknown fashion future. 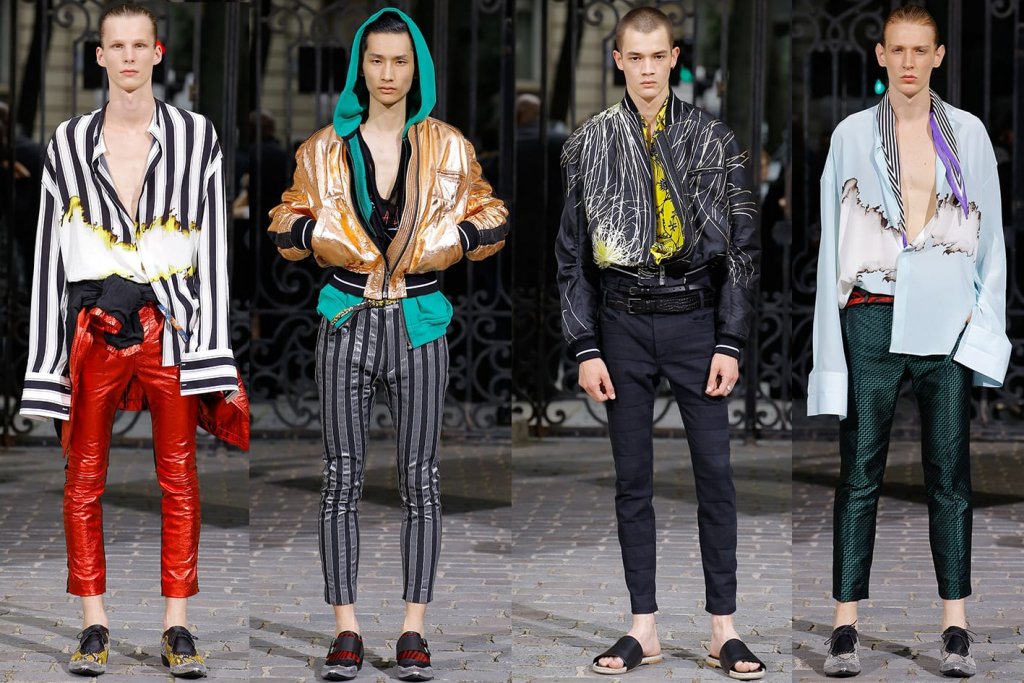 Between intermittent summer rainshowers, Haider Ackermann showed a collection that held to his romantic world view. Nonetheless, a new positivity to his poetic pieces made this collection shine bright this season.

The heavens held off just long enough for Ackermann to present his entire show. And it did feel like the gods were smiling down on the designer. His menswear, which had been in a slight rut the past couple of seasons, only got drenched by one thing – color.

The optimistic show included a pink silk bomber jacket accented in canary yellow, mint green pants, a cobalt blue coat, a black leather jackets half coated over in a glossy red finish and a sunset orange and yellow suit. Although the colors felt new and fresh, the dandy silhouette was still undeniably Haider.

In a show filled with winning pieces it was perhaps the colored smoke-print, or was it a burned away motif, pieces that felt the most daring. The fluid movement of the fabric as it caressed the body and the “in action” print combined in a heady way that was both sensual and stylish.  This was a solid collection from the designer and proved that exploring the sunny side of life can be quite rewarding. 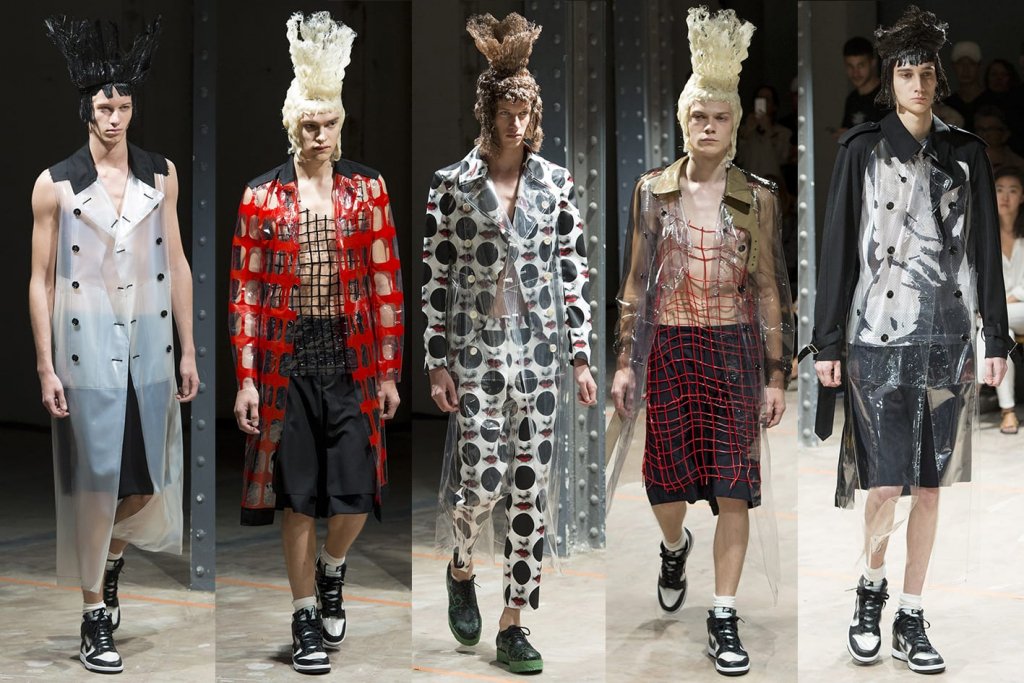 Talk about fashion with a message! Designer Rei Kawakubo had quite a lot to say with her latest menswear collection. With a lineup that featured pieces crafted from see-through plastic she tagged much of that transparency with hand scrawled messages that said things like “Pride Before the Fall” and “The King is Naked”, this show will go down in the annals of Comme des Garçons shows as being “The Emperor’s New Clothes” collection.

How else to describe a lineup that was crystal clear in its message of transparency via PVC raincoats, city shorts coated in clear plastic and invisible capes?

The models, their hair stiffly set into crown tresses, looked regal in their designer finery, although exposed under what they wore. Particularly interesting were a series of Fornasetti printed outfits that took the whole idea of self examination and exploration to another level. However, no matter how sheer the show was in terms of the materials it uses, Kawakubo is as opaque as ever. Only her brilliance as an artist and designer is consistently visible for all to see. 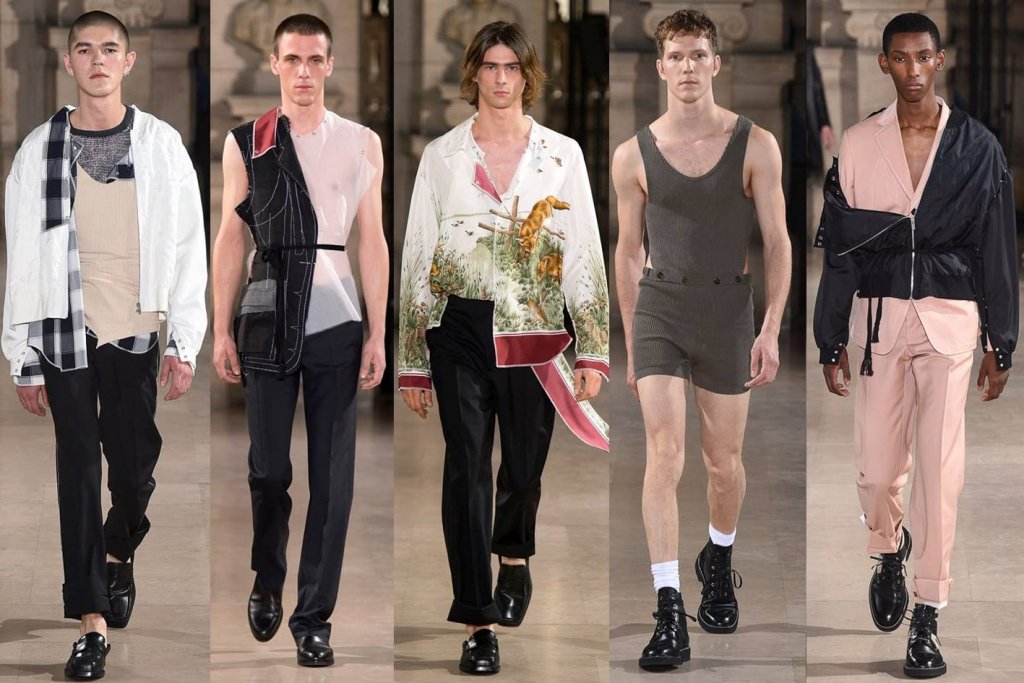 Last season the Margiela show was forgettable at best. The design team clearly got the message that something needed to change and presented a collection that went back to the fundamentals of what made this brand so exciting in the beginning – creativity and construction.

To the always evocative music of Leonard Cohen, this time singing “Last Year’s Man” the collection unfurled as an exploration of what the fundamental structure of menswear is. This was examined in everything from the use of basting stitches on suit jackets and vests to a bomber jacket designed with button fixtures at the shoulders so that the sleeves could be detached. Classic shirting was fabricated out a patchwork of staple materials like poplin and chambray, and someknitwear was even woven into the mix.

Everything was slightly off-kilter, undone and relaxed. It made for a collection that had an easy nonchalance. Nothing felt rushed or overtly intentional. And yet all the pieces came together to create a well-rounded offering that walked that fine line between being creative and commercial. 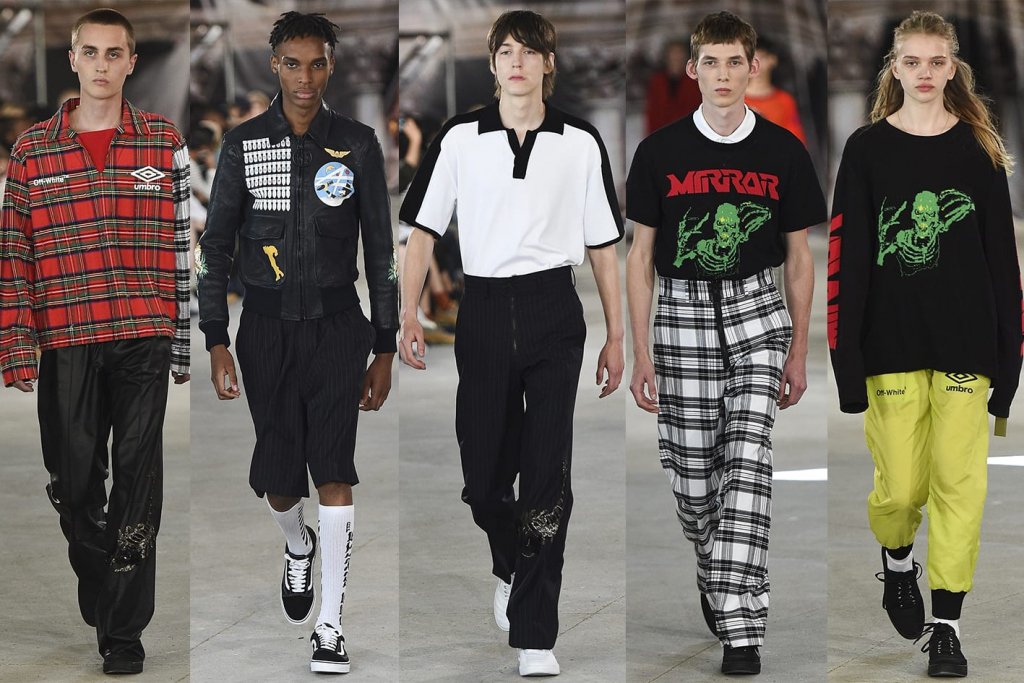 The social media savvy designer Virgil Abloh is a big believer in inclusive fashion. And to that end he posted the outdoor address of his spring/summer 2017 menswear show on his Instagram feed and told his fans to come out and catch the show. And came they did, swarming around the Philharmonie de Paris. Their presence instantly brought an atmosphere of youthful vitality to the proceedings.

Arguably this generation’s obsession with self documentation and self promotion inspired Abloh to call his collection “Mirror Mirror”. There is a narcissism inherent in the endless posting of selfies, location tagging snapshots and communicating via emoji language. The designer subtly touched on this modern day phenomena by teaming up with the artist Brendan Fowler to create fabric replicas of a stack of fluttering photos stitched to the front of a coat or inserted into a semi-sheer top. The images of skeletons, crosses and scorpions also made some strong streetwise statements on tops, knitted into sweaters or embellishing pants.

Even Off-White’s partnership with the brand Umbro, which was woven into the rest of the collection, highlighted the new sort of designer that Abloh is. His fashion is collaborative in nature. His creative spirit is stirred when he can bounce his work off of other like-minded artists. In this way his clothing reads as much as an artistic endeavor as it does a fashion statement. 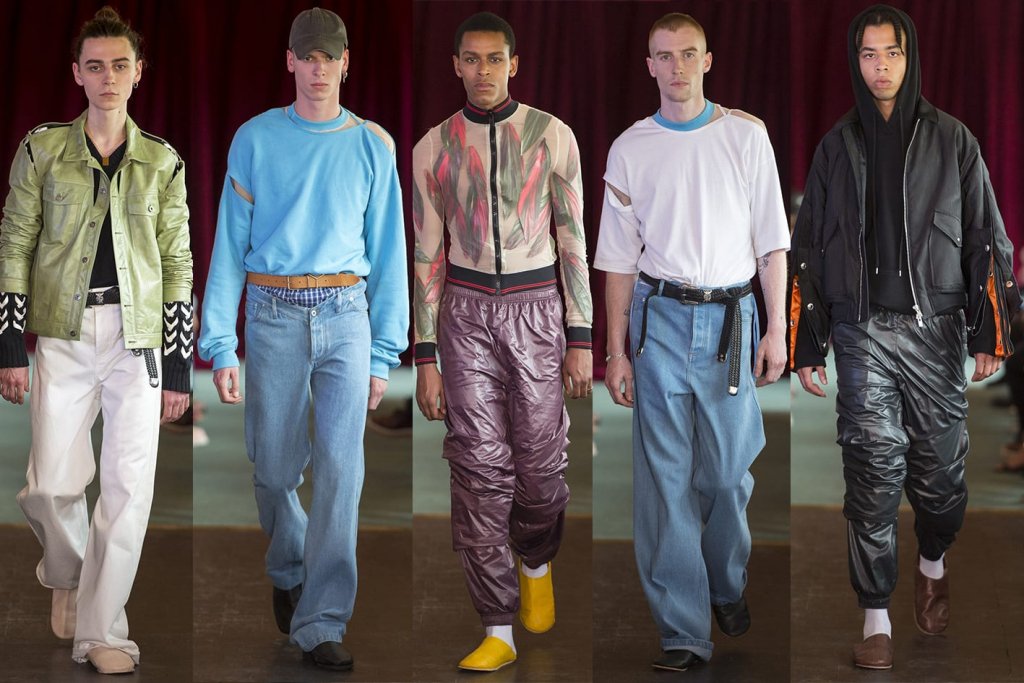 Not even a bout of nausea caused by the rocking houseboat venue or the sweltering heat inside the claustrophobic show space could stop the talent of designer Glenn Martens from penetrating to collective fashion psyche. There is a reason his brand, Y-Project, made it into the finals of this year’s LVMH Prize. The designer has a unique fashion perspective that plays on the current genderless tendencies that are dominating the industry.

His avenue to blurring the gender lines is twisting wardrobe staples so that they challenge preconceived conceptions about them. For example a traditional menswear suit, in Martens’ hands, would come in a girly bubble gum pink. Or he would add a smattering of simmering sequins on a denim jacket. A play on proportions, so that the form of the body below the fabric is obscured was another successful tactic the designer used this season. He ruched glossy nylon pants into folds on the bottom half of the legs, gave his knitwear wide hand-engulfing sleeves and the do-it-yourself button-up pants designed to make hemlines adjustable made it possible for a number of different body types to wear the same pair.

It says something about the strength of this designer’s vision that after a week’s worth of shows, his collection is one that lingers in the mind. 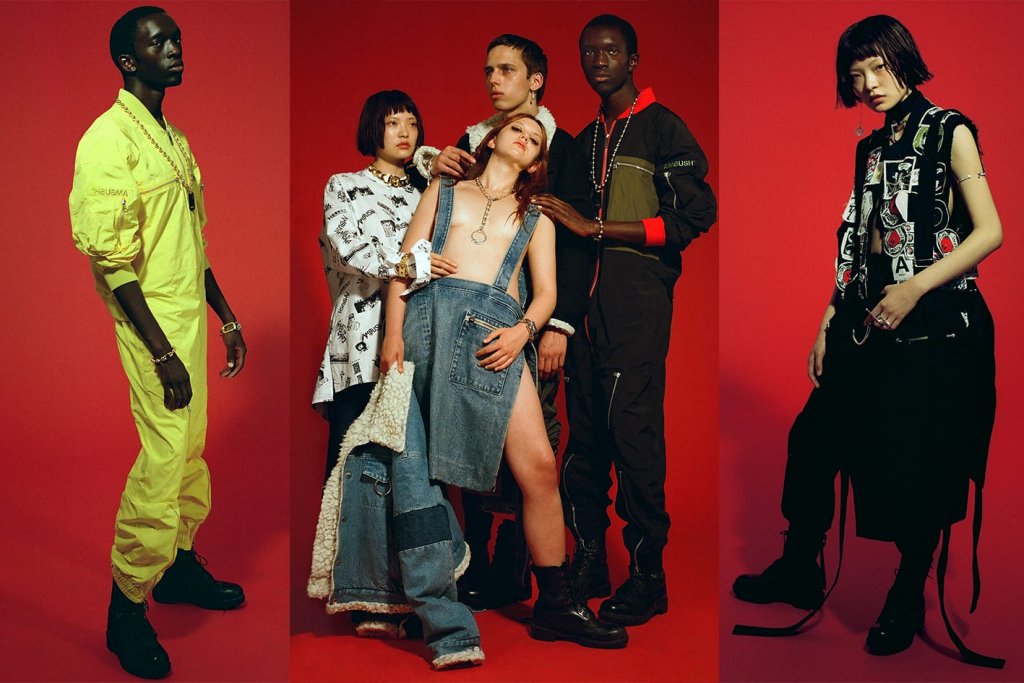 Yoon, the designer behind the cult Tokyo-based streetwear and jewelry label Ambush was late for her own presentation on Thursday because she had been invited to Kim Jones’s Louis Vuitton menswear show in the morning. Considering that Jones featured a number of padlock necklaces and punky silver bracelets, which were very much in keeping with what Yoon has been creating since she started her company in 2004, it’s clear her aesthetic is reaching a wider audience. In fact, her jewelry was featured in the Sacai menswear show this week.

But Yoon is not just about jewelry. The autodidact artist is also a fashion designer and her latest offering was inspired by the Sound System culture that was born around the same time as the punk movement was taking over the United Kingdom. This brand has deep roots in the world of music and that shows in this strong collection. The perfect example was an open knit top made out of colorful cords crafted to look like eclectic cables, with metal plug-in fixtures at the ends. Other wining pieces included ponchos as oversized version of classic silk bombers and a reversible denim and sheepskin jacket that featured pocket piercings in the form of bent nails.

With her first standalone store about to open in September in Tokyo, Ambush looks to be well on its way to ensnaring the cool kid fashion crowd on a global scale. They won’t know what hit them. 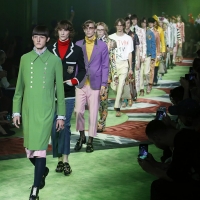 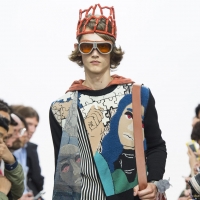 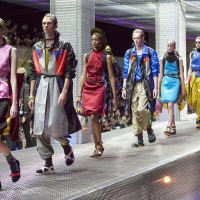