Alexander Wang chose to present his first collection since he said adieu to his gig at Balenciaga at the St. Bartholomew’s Church on Park Avenue in New York. Yes, this was a come to Jesus moment, where Wang’s urban flock could celebrate the return of their sartorial messiah. 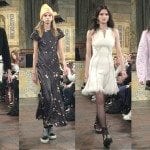 And there was a lot for them to celebrate. Wang went back to his roots with this fall/winter 2016 show. A decade into his signature brand and he is still able to telegraph with his clothing a rebellious cool that doesn’t ask for permission or demand approval from anyone. His women, and for the first time on the catwalk, his men do not look for outside approval for anything. They have a defiant dress code that consists of shaking up the status quo.

This season, that consisted in creating an army of rocker punks who wore their appreciation for marijuana by embroidering the plant’s distinctive leafs onto their dresses and skirts, pierced their jackets with metal grommets and used modesty panels as a backdrop to one word messages like “strict” “faded” “violator” and “tender”. So badass was Wang’s crew that he was even able to make the most girly sweet material in the world, mohair, look feisty, tricking it out as he did with the motif of a pole dancer in profile.

But as street as this predominantly black and white collection was, the three years Wang spent working at the luxury French fashion house could be felt in the refined construction of the garments and his choice of luxe materials used to build his unruly fashion horde. The designer might be happy to have put the Balenciaga chapter of his professional life behind him, but today it served him — and his devoted clients — well with this very strong collection.