In a direct trickle down from their most recent haute couture show, designers Maria Grazia Chiuri and Pierpaolo Piccioli presented a Valentino collection inspired by the world of ballet. 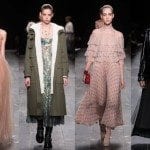 To the melodic notes of a baby grand piano being played with feeling in the middle of the show space, the duo sent out a collection that followed the life of a prima ballerina from her time off, through her warm-up classes, to dress rehearsal and finally opening night. In this way they were able to expand out from familiar ballerina tropes and inject, ever so slightly, a bit of street into their designs.

Seeing a leather perfecto jacket worn over a black tulle dress, combat boots finishing off a number of looks — including a long pleated navy coat and a black velvet star-embellished dress— and snuggly sweaters worn under shimmering sleeveless silver dresses was something of a shock on a Valentino runway. But it worked as beautifully as the rest of this collection’s more romantic offerings.

The duo also explored the different aesthetics of a number of key choreographers to help give the classic looks added depth. There was the punky spirit of Karole Armitage in the black tulle gowns and the leather tutu covered in rectangular metal embellishments. One stunning long-sleeved bright yellow velvet dress was a clear homage to Martha Graham. And understated silk jersey pieces that moved and clung to the body were a poetic nod to Merce Cunningham.

It was pleasing to see many ensembles with couture level embellishments alongside others with the graceful simplicity of drape and cut. These were the pieces that mere mortals might actually be able to afford next season. Otherwise there are always the aspirational accessories like the studded ballet flats or boots.

Once the last note of music rang out and the ovation from the audience began, it was clear that this collection had danced pirouettes around most of the other shows in Paris.