This season Thom Browne pulled back a bit on the theatrics and presented a poignant collection that celebrated the beauty of repurposing and renewal. 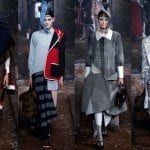 But this being Browne, he viewed his underlying concept through the prism of the Great Depression. The collection, which dovetailed perfectly with the menswear show he presented in January that featured triptychs of the same ensemble in different states of wear, saw his female models usurping their male counterparts’ suiting and repurposing it for their own sartorial goals. Each model walked around a barren city square garden, framed by a backdrop of faux 19th century buildings, in outfits that had been lovingly cobbled together from what looked to be former finery.

The most impressive pieces included a skirt crafted from men’s tailored suit jackets, pinstripe pants with perfect denim patches and a series of flying buttress fabric pleats that swayed back and forth as the models took a turn in the garden. Browne’s attention to detail is as exacting as it is charming. The stiff men’s business ties used to frame the models’ faces and the endearing animal-shaped handbag (dogs, whales and a crab) finished off the designer’s luxe take on high-end recycling.