The Substantial Ideas of Rick Owens

Walking into the cavernous Rick Owens show venue, the surprising vision of a black-clad Donna Karan heading to her seat stopped me short. Even more surprising was the sight of her designated seat mate — Claude Montana. What were these to fashion icons doing at the Owens show? 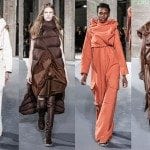 But that is the fundamentally great thing about Owens’ work, it bring people of different design leanings together in their mutual admiration for a designer who exists in a creative universe all his own, a space that both challenges as much as it comforts. This season he leaned much closer to the latter impulse with a cocooning collection that created a sartorial safe space in the fashion world.

The lineup was an exploration of different ways in which to drape fabric in a manner that had a prehistoric primitive energy about it. Textiles were folded, twisted, tucked and placed about the body so that the garment were give a three-dimensional sculptural structure, a sentiment heightened by the face obscuring swirls of hair that encircled the heads of a number of the models.

As esoteric as much of this collection was, there were a few pull-out pieces that had their feet more firmly planted in reality. In particular, some long dove grey coats that come covered in what could only be described as mint green magma melting over the shoulders and down the length of the garment. Also the chest high super wide pants had a sort of mastodontic charm, which makes sense when you know that Owens titled the collection Mastodon.

However, as voluminous as this collection was, not once did it look heavy-handed or cumbersome. Owens has a light touch even when he is working with substantial ideas.