The Luck of Philip Lim

Far-flung show venues in New York are the bane of every fashion journalist, editor and photographer’s existence. On Monday afternoon, when the snow started to stick and the roads became slippery, it was designer Phillip Lim who took the brunt of the logistical fallout and started his signature show, even after waiting more than 30 minutes, with a number of key journalists still valiantly struggling to make it to his venue. 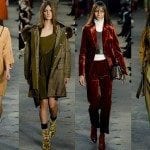 What those who arrived late and had to stand on the sidelines could appreciate was the way Lim was able to take fashion staples and give them a modern twist. In the literal sense, on sweaters that came with sleeve-like belts tied at the waist but also figuratively in how he blended masculine and feminine fabrics together in a way that felt fresh, particularly via his autumnal color palette. The designer was also on trend with his use of velvet to create some strokeable suit jackets and a patchwork effect on cargo pants.

The leitmotif of the collection was the ginkgo leaf. Its unique shape came shimmering down the front of shift dresses, tops and pants. Legend has it that if you catch a ginkgo leaf as it floats to the earth, you will have good luck. Lim certainly looks like he is going to be lucky with this oddly alluring lineup.