Roland Mouret is a designer of two cities. One is London, where he lives and works and the other is Paris, where he shows his figure-hugging feminine collection each season. This dichotomy was plainto see in his most recent collection when he blended together a retro 70s boho vibe that touched on both the London cool and the Parisian chic of that era. 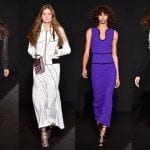 Two icons of that time were Stevie Nicks and Kate Bush (whose music played on the show’s soundtrack). Their gypsy magpie style, which wasbuilt from vintage Victorian and Art Nouveau finds, was revised by Mouret into something sleeker that still maintained that sartorial essence of witchy romance.

The designer’s body-con dresses became pretty patchworks of matte and shine as velvet was used to highlight the graphic forms Mouret was crafting across his clothing. One particularly interesting offering was a dress with a red velvet top that cascaded down into a matte black skirt, its rich undulating fabric leaving crescent-shaped bits of bare skin apparent. A highly embellished honeycomb lace used as sleeves on dresses produced a dappled pattern that had an organic beauty to it. And the introduction of multicolored piping that curved down anddelineated sections on a white skirt was a fresh idea.