When a brand become synonymous with one style it can sometimes be a burden for a designer to break free of that aesthetic or perpetually find new ways to continue its relevance. This is what designer Rodolfo Paglialunga has been struggling with during his tenure at Jil Sander, where minimalism is the hand he was dealt. 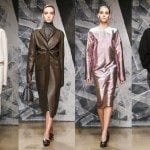 This season however, it looks as if the designer finally got some cards he could actually play with. In one of his strongest collections since his arrival, Paglialunga used an exploration of volume and the use of lustrous fabrics and metallic embellishments to craft a lineup of clothing that resonated chic solemnity.

His deft manipulation of proportions saw the designer playing catch-and-release with his fabrics. He would cut coats and jackets in slightly oversized shapes so that they would create a slightly cocooning rounded shape when pulled in at the waist with a belt at the back. Tops would come with sleeves that fell well below the wrist and slip dresses would actually obscure the female form in column-like scope.

The introduction of glossy fabrics was another way he tried to lighten his austere designs. Their sheen, be it a textural Lurex sweater, a mesh-like rose hued skirt or a luminescent plum colored shift dress, did bring warmth to the minimalistic designs. The lone embellishment, some frenetic scribing lines of metallic threads scrawled across pant pockets or in a band across the shoulders of a boxy jacket, also added some much needed energy.

Now all that is left is for Paglialunga to stop waiting for his hand to be given to him each season. Instead he needs to really start dealing out the cards for himself and take control of his own future. Jil has left the game, the only person Paglialunga is playing against now is himself.