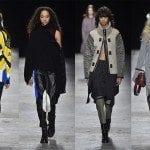 The pair created a convivial atmosphere at the end of a long and grueling day filled with a number of key fashion shows as well as lots of snow and rain. Their large empty hangar-like space became a safe haven where drinks and truffle popcorn were served before the duo reenergized the audience with some fantastic live music from Atoms for Peace and a just as fantastic lineup of urban attire.

Down a two-lane runway – on the inside the menswear and circling around it, the womenswear – the designers offered up an army of cool downtown kids who just happened to look a bit more put together than their real-life counterparts. All the city staples were there for the picking: the shearling-lined coats, the graphic hockey-like jersey tops, high-cuffed denim pants, tracksuit bottoms and fun oversized cable-knit sweaters with buttons racing down the arms.

There was also a hardy outdoors core at the center of this season’s design concept. Sports like hunting (orange quilted jacket), motor cross biking (articulated pants) and hockey (the aforementioned jerseys) were all alluded to on the catwalk. They all just came together in a way that felt organic, real and timely.

This was a show that checked all the boxes in terms of modern street style. It left guests feeling happy to have been there to see it come to life on the catwalk.