What a difference six months can make. Just like his predecessor Peter Dundas with his new gig at Roberto Cavalli the day before, designer Massimo Giorgetti made a concerted effort this season to return to the codes the founder of his house first established. 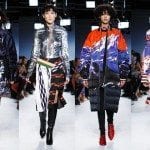 When Emilio Pucci began in 1947, skiwear was where he initially made his mark. His colorful graphic designs popped against the pristine white slopes almost seventy years ago and today Giorgetti’s mountain peak prints, vivid patterns and bold color combos felt very much like streetwise decendants of those early designs, the addition of pointy-toed footwear with ski boot fixtures and fittings finishing the idea off with aplomb.With this show, the thought behind Giorgetti’s appointment at Pucci really came into focus. He knows his sportswear, bold colors don’t frighten him and he can inject urban edge into a house that been, up until now, courting glamazons and boho babes.

This sophomore show was a smart move by Giorgetti and pointed him in the right direction for the future.