Day three of Paris fashion week included a trio of Asian designer who have become pillars in the fashion world for their avant garde outlook on fashion. In a whole different design registry Ricardo Tisci at Givenchy took on western wear and gave it a sporty street edge. 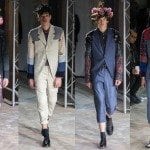 Clothing is good for many things. It keeps you warm. It protects you from the elements. It is a form of self expression. And in key moments in life, it can become formidable fashion armor.

It was this last facet that Rei Kawakubo explored on her menswear catwalk in Paris. She twisted the idea of traditional garments that are used on very specific occasions, reworking the tropes so that a wide variety of fabric swatches were stitched together to mimick the look of a knight’s armor.

In this way a tailcoat jacket customarily worn at a formal event would have sections of the tails crafted from panels of different plaid wools. A corporate pin-striped suit would appear with sleeves cut from a selection of different brightly colored jacquards placed one above the other for an articulated appearance. And a bad boy perfecto leather jacket featured delineations in the form of metal rivets worthy of a medieval blacksmith.

Kawakubo’s collections tend to be very intellectual in nature, shows that stretch the mind and touch the soul. This time the audience didn’t have to go more than half way to meet the designer as her silhouettes hewed closer to conventional clothing standards than usually. But that didn’t make them any less impactful.

Only the most hard-hearted person would not be moved by the romantic sight of men with roses woven into their tresses walking towards you with a colorful bouquet of blooms proffered up like a first date ritual. 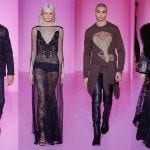 If there was any doubt left that a western trend was taking hold of the fall/winter 2016 season, Riccardo Tisci put them to rest with his latest Givenchy show.

Forgoing any theatrical sets, something the designer usually favors, Tisci chose to go with a minimal — if bubblegum pink — venue. Within the confines of these walls, the designer brought his buff urban sportswear aesthetic to bear on a style of dress that, and let’s be honest here, can look very camp, very very fast. But by keeping the color variations to a minimum (lots of black, beige and brown) the western elements of the collection didn’t get the better of Tisci.

He was pretty much able to pull off a fringe-sleeved leather jacket, chambray shirts with their silver tipped collars and an assortment of pieces that featured rose gold rivet details. Best were the designs that feel more inside Tisci’s wheelhouse. The blouson jackets constructed with laser cut images of a cobra about to strike had a real bite and the long coats that incorporated faded graffiti images into their woolly foundation were fresh.

Tisci’s couture collection was once again folded into the menswear show, each one-of-a-kind dress a standalone design created to make a statement rather then be part of a clique.

But it was the boys who dominated the show, their potent masculinity sending out hot-blooded pheromones that will have women trailing in their wake. 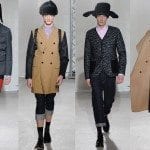 On his catwalk on Friday, Junya Watanabe explored  how men can be more self-sustaining. The designer produced a collection filled with outerwear created specifically for the modern man who is always on the go and therefore must take everything with him, to the point of needing to literally generate his own energy.

Watanabe inserted strips of solar paneling into his classic coats and tailored blazers. They certainly were practical. The wearer could use the sun’s rays to power a smart phone or tablet through a connecting cord at the shoulder. But the hardware also made for a cool and graphic new sort of male embellishment.

Other practical additions to the collection included multi-pocketed jackets, aluminum lining on the inside of garments to keep the wearer extra warm in the winter as well as an assortment of furry hats and long thick knit scarves, all of it designed for outside living and chic self sufficiency.

The collection had more than a few nods towards British style. The choice of traditional English checked wools used for coats and jackets, usually associated with the stuffy upper crust, was undercut by the designer’s use of patchwork denims while button-up shirts covered in graphic bonded appliqué strips gave the lineup a bit of London cool. Also, it’s hard not to infer a UK connection when all the models are sporting Beatles mod bobs.

This was a fine collection that found a smart new way to bring menswear’s sartorial heritage into a future where needs and desires dovetail perfectly. 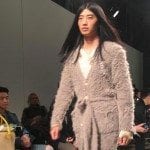 It is not an easy thing to imbue clothing with a sense of poetry and grace. And the climb to reach those peaks is often even harder for menswear designers. But season after season Mihara Yasuhiro digs in his cleats, grabs hold of the craggy mountain side and makes that treacherous ascent without ever falling prey to the crumbling facade of masculine stereotypes.

His signature collections, including his latest offering, are thoughtful propositions that elevate menswear by challenging it just enough. Through his rich constructions, considered pattern combinations and textural fabric exploration, he produced garments that forgo referencing the past. Instead the designs reside wholeheartedly in the here and now.

This season, his raw-edged oversized hybrid ensembles, roomy patchwork denim pieces and touchy feely fabrics gave his show a well-loved look. Leather biker jackets were faded along the zippers and pockets, knitwear unraveled to let a second layer (in a contrasting pattern) appear through the apertures. Squares of comic book and newsprint motif fabrics were applied to full cut trousers and outerwear, their ends curling up as if aged over time.

The designer wanted to created a collection inspired by « The Portraits » of August Sander that were first unveiled a century ago. His goal being to craft beauty through « incompletion, irregularity and deviation. » He succeeded with flying colors.

Both original and quirkily homespun, this collection made it easily to the menswear summit. 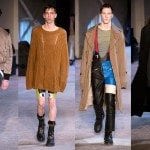 How would rebellious London city boys look after a few hours spent at their local YMCA gym? That seemed to be the question that the design team at Maison Margiela asked itself when they started working on their latest menswear collection.

How else to explain the combination of Lycra biking shorts, sporty second skin long sleeve stretch tops and wrestling costumes juxtaposed with long drooping sweaters and roomy frayed suiting. It was almost as if the models had slipped into those outfits in a hurry and didn’t even have the time to button up jackets, snap coats shut or even, in one case, slip on a pair of pants to cover up the gym wear.

The highlights in this collection were the long coats that featured duffle toggle fastenings. The coats had a confrontational allure in the way they were constructed in unfinished panels of fabric, held together, or not, by those judiciously placed toggles.

Otherwise this was an offering that felt less fully formed than the previous season. Here’s hoping next time the team can bring a bit more finesse to the brand’s deconstructionist codes