The rigor of military attire was explored to different degrees by a number of the designers who showed their collections on the second day of the Paris Menswear shows. It was interesting to see the different perspectives taken by the designer as they balanced their concepts against the touchy nature of the current world political climate. 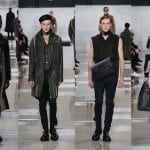 Kim Jones is a traveling man. We all know that. A childhood spent following his parents for work left him with a wanderlust that has yet to be sated. But this season, instead of looking far afield for inspiration, the artistic director of Louis Vuitton’s menswear found everything he needed right in his backyard — Paris.

Below an undulating translucent stretch of fabric that billowed above the catwalk (an art installation by Shinji Ohmaki), Jones presented a reserved and stoic collection that suggested military rigor in its tailored construction, gray, olive, navy and kaki color palette, and the choice to incorporate French berets. Berets that, when paired with a shearling patchwork overcoat pulled taught to the body or a military blouson jacket, brought to mind chic young French Resistance fighters.

There was a strong graphic element to this show — in particular, the use of a bold navy and gray zigzag pattern, or a cross motif that brought to mind the Red Cross insignia, used on flannel outerwear — which helped to underline the austere sensibility of the garments. However the idea of laser cutting some vintage Louis Vuitton luggage stamps onto calf jackets and sweatshirts hit the single dissonant note in this collection.

When Jones did loosen up, he produced poetic silk print tops covered in a ribbon design that hinted at the work of Jean Cocteau in the profile of a face that appeared in its curves. And the brash silk outfit that was covered from head to toe with the words “Volez Voguez Voyagez” made for a playful sartorial interlude.

If Jones’s goal was to create a « future heritage » with this collection, some impressive denim numbers, like a pair of crackle effect “Roketsu” pants and a glossy silk denim outfit had real legacy potential. Also his slightly ethnic open weave mesh knitted tops had all the hallmarks of a new cornerstone concept for the august French luxury house. 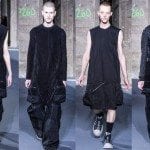 In the raw concrete bowels of the Palais de Tokyo in Paris, Rick Owens presented a menswear collection that sent shivers of excitement down the spine.

Now, dramatic presentations are nothing new for the California native. But what made this collection so especially thrilling was the way in which Owens stayed true to his iconoclastic predilections while still finding a way for those creations to exist more broadly in the real world.

He sculpted a lineup that was both utilitarian and primitive. Models, some with faces painted to look like hollow-eyed white walkers, clomped down the catwalk in roomy pragmatic jumpsuits, long voluminous mohair hoodies and outsized coats that sprouted what looked to be multiple sleeves out the sides.

But for every fascinatingly off-the-wall outfit, Owens offered up an alternative, dare it be said commercial, option. These included some fantastic fitted leather coats and suit jackets ― both long and cropped ― as well as a smattering of long and lean knit sweaters with ribbed panels inserted at the shoulders.

In a show filled with great choices it was perhaps the denim looks, which seemed as if gallons of bleach had been poured down the shoulders, that were the most engrossing. It was almost as if the garments were melting away before the audience’s eyes.

The phrase that repeated on the Owens soundtrack stated over and over again, « I just called before I throw myself into the icy lake » and in a way this collection did exactly that. It was chilled to the bone. The clothing acting like a visual embodiment of a designer frostily in control of his emotions and his aesthetic. 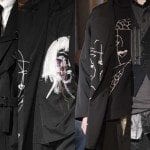 Audio tracks and some of the iconic songs of the 1960s that played a prominent role in the classic 1986 film « Stand By Me » gave Yohji Yamamoto’s latest menswear show a coming of age undercurrent, examining when boys put away their childish things and become the men they were destined to be.

The circle of life lineup started with the models wearing layers of padded clothing in the designer’s favorite urban palette of grey, black, navy and white. Tops were bursting at the buttons, pants were forgivingly cut and the models’ pin heads peeked out from looping wide scarfs, their hair woven into a single wild boy fishtail braid hanging off one side of the face.

Then the baby fat melted away as the clothing deflated and became loose sartorial strata hanging about toned bodies. Occasionally, straps to the torso and legs cinched them close to the body as if the models wanted to hold onto now-baggy cherished pieces of their youth or maintain a connection to a rebellious past by stitching into the fabric abstract primitive graffiti portraiture.

Finally the designer brought his nonconformist collection full circle with the thicker designs reappearing, as if with the weight of age. But Yamamoto’s men don’t go gentle into that good night. Instead they continue to rail against the world, this time scrawling their discontent on their tops with provocative statement like « Corporate Mother Fucker » and “The only woman I have ever known is my mother”, or scratching out their father figure’s image onto the fabric of their t-shirts. And who is that figure?

Why Yamamoto himself, of course. 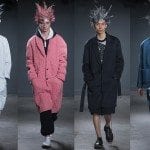 The thing that will stick in everyone’s minds about Julien David’s latest show is the hair-raising punky silver tinfoil coifs that the designer finished his menswear looks with. Granted, they made for some very cool Instagram posts and they were absolutely on message in terms of the show’s manga muse. But it would be a shame if the locks were the only thing that the audience took away from this fine show.

David explored the idea of taking common workwear, notably that which is worn in his beloved Japan, and giving it a futuristic spin. He deftly accomplished this feat by cutting thin layers of high quality stretch denim and bonding it to jersey to create spongy-soft, yet voluminously stiff, shapes that rounded over the body.

The designer also took to heart the fundamental functionality of workwear by making most of his pieces reversible. Buttons on the inside and outside of jackets, two-way zippers and drawstring hemlines worked no matter which way the model decided to sport a laminated nylon parka.

The attention to detail was also of the highest order. The way David created pockets that started flat at one side and slowly were give a touch of three-dimensionality as they progressed across the body will surely help seal the deal on sales. And the colorful quilted flower print pieces, with top stitching that echoed the models’ spiky hair style, was a charming touch.

This was a winning collection that worked both as a directional endeavor and a truly modern menswear alternative. 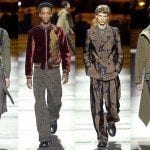 Over the years, Dries Van Noten has come up with quite a few stunners in terms of show presentations. People are still talking about the womenswear collection where his models walked down the center of an extremely long dining table, just after all the guests had finished their meal. But with his fall/winter 2016 menswear show the Belgium designer once again raised the bar.

Fulfilling a dream that had lingered in his mind for years, and perhaps to mark the 40th anniversary of his brand, Van Noten invited his audience to the Palais Garnier on Thursday night. Guests arrived through the artists’ entrance at the back of the Opera House only to emerge center stage in one of the most famous locations in all of Paris. Even the most jaded fashion editors looked on in wide-eyed wonder and spoke in respectful hushed tones. The experience was magical even before the first model made an appearance.

When the curtain finally did go up, to reveal the designer’s entire tribe, the high expectations of the spectators were met, and then some.

His romantic vision was a brilliant psychedelic mélange that merged the powerful and opposing sartorial viewpoints of the hippies and the military, circa 1969, but in a way that made the past modern and very much of the now.

The designer went as far as to commission the famed psychedelic poster maker Wes Wilson, now 78 years old, to reinterpret his work into gorgeously vibrant embroideries for the show. Van Noten offset this artwork with military strictures to the garments and softened the thematic palette with a play on proportions and an abundance of judiciously placed military patches.

The leitmotif of the collection was a preening peacock that appeared as an appliqué down the shoulder of a jacket or as the motif of a rich purple and blue jacquard. But as decorative as this was, not once did the collection feel dandy or decadent.

This show was a badge of honor for Van Noten. It is one he has earned, and so richly deserves.