Embellishing or stripping back to essentials, these opposite desires saw designers face off on the first day of Paris’ menswear shows. Lemaire and Raf Simons turned an eye towards the past while Valentino and Haider Ackermann cast their gaze to other horizons. Whichever way the pendulum swung, craftsmanship and an ability to project into reality were the driving force behind collections that blurred gender divides more than ever before, offering a new palette of masculinity for fall 2016. 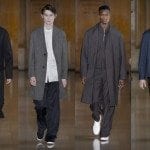 Lemaire has long offered a palate-cleansing blend of hardy and exquisite delivered on dependable shapes given just enough of an imagination to move their style cursor from anonymous to signature. Behind all this, Christophe Lemaire and partner Sarah-Linh Tran offer a form of neutrality, one in which the slightest inflection one way or another is a deflagration. Here, for example, an adroit softening in razor-sharp tailoring that swings both ways between masculine and mellifluous.

Lemaire clothes embody a normality of sorts, one where precision is the guardian of stability. But that does not preclude moving in new directions, or a dash of careful experimentation. Point in case, the deeply open collar on his shirts hinted at a typically Gallic sensual louche-ness, just enough to entice yet still maintain propriety; the dignity of work wear is mined to inflect this. Masculine and sensual, easy but not slouchy, in a nutshell. The designer loves a monochrome palette, layering a duffle coat, extra-fine sweaters and chinos in dark hues, cut from hard-wearing fabrics like wool gabardine and denim.

Coats, always a strong suit here, were all at once classical and pared down to their simplest expression. You can tell a significant part of the design process is dedicated to removing extraneous bulk in all places. How else would you obtain such seamless layering, and one that moves so beautifully together too?

As always, each element deserved thorough scrutiny, a trait that needs to be relearnt in the age of instant visual consumption, and 24/7 shopping incentivisation. But Lemaire has plenty of time, if you keep in mind that Lemaire and Tran offer garments that should outlive any fashion cycle.

As frigorified guests filed into the Hôtel Salomon de Rothschild for Valentino, seeking to escape the cold, they were greeted by the unusual sight of musician Michel Gaubert and his Mini Me — a puppet in his exact likeness right down to the mirrored sunglasses he is off pictured sporting — sitting in the front row.

The collection followed a path to self examination, mining a distinctive melange of references: classically English, punk, denim, Native American, Texan. Pierpaolo Piccioli and Maria Grazia Chiuri sent out a procession that ran the gamut from tailored outfits which would put to ease even the most laced-up city dweller, to the poets of the wilderness (provided they do not meet the same end as Christopher McCandless). Those who will follow the trail will move from silken pajama shirts to trench coats with a delicate row of studs along the bottom hem, from a camel overcoat with a gradient to black along the edges to leather jackets peppered with pearls.

There was a grandness to these decorations, however subtle they were. At Valentino, these are fast becoming one of the signatures for men. Even the geometric patterns lifted from Navaho imagery reminded that they were truly enlivening the exquisite cuts. It takes a couture level of precision to create a patchwork so bulk-free and exquisitely matched it almost could be mistaken for a print.

This was a toothsome lineup that will cover a broad range of tastes and situations, supported by an execution that speaks of the rarefied strata in which the brand evolves, and of the hawk eye for perfection of its designers. Most importantly, it translates well into real life, even when contemplating a beaded and lightly feathered jacket, or a sweeping poncho.

Ultimately this is what distinguishes this collection from its contemporaries following this path of male embellishment. And this is something everyone can get behind, even Mini-Michel. 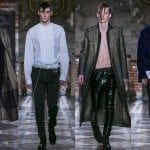 Against the gilded backdrop of the Paris town hall, Haider Ackermann’s men looked positively decadent. Not in how lushly they were dressed, despite the abundance of vivid blue crushed velvet or metallic jacquard but rather how they dared to preen in their version of jarringly different finery, playing off their relative darkness against the opulent background. To many this may have seemed a distracting presentation, with the richness of the surroundings, it was a balancing act.

These men (and at least one woman) were peacocks portraying a particular image of masculinity where fluidity is key. « Ambiguity is today’s decadence, » he said after the show. « And in the world we live in, that means freedom. It’s a good thing. » He offered a blended fantasy of faraway trips and indulgent escapism that played on an evocative chord rather any strict referencing.

Sexy in its ambiguity, the whole picture is a dazzling, dashing, decadent treat — think slim rocker proportions on the leg, quilted velvet coats, liquid reflections sliding down the body, mismatched shimmering jacquard worn in on the same outfit, a black changshan and tantalizing flashes of skin — but at all times, Ackermann is in control of his effects, distilling them for maximum effect. He is clearly fascinated by the risk-takers and boundary pushers, and that has been holding sway for some seasons. « Every dandy has a rather punk attitude, otherwise he wouldn’t dare. To be who you want to be is a liberty — that’s being punk. » 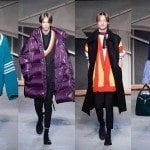 A plywood maze awaited Raf Simons’ guests in his venue, a vast yet low-ceilinged place behind the Gare Saint Lazare.  Helped by the voice of Angelo Badalamenti recollecting on the creation of the Twin Peaks themes with David Lynch (who turned 70 today), guests took their positions in the nooks and cranies of the set, paying mind to the thin black line that would twist and turn sharply around corners.

Cue music that set the tone to his telescoping of Twin Peaks and horror classics – yet another way of reimaging his trope of order and chaos – with teenage hallmarks of cool. On a sheet handed out to guests, a pêle-mêle titled ‘Nightmares and Dreams’ listed cues to what had Simons ticking: Lynch, of course, but also Margiela, Cindy Sherman, Elm Street, Detroit, Tulsa, Red Americana, Flemish Blue…

Irrespective of Simons’ actual starting point, it was easy to project ideas and feelings onto the discreet elements that composed it. So picture this: the all-American youth meets a sticky end between the fearful walls of their own imagination. Clearly, the most destroyed garments in the Belgian designer’s lineup were the ones that referenced the jock, the frat boy who never makes it past the first quarter of the movie. His wrecked wardrobe is salvaged to shield the science club geek who thrives in such an environment.

Oversize jumpers that reached to the knee and past the knuckles were moth-eaten, perhaps even ripped. Voluminous puffer jackets and tailored coats stood in contrast. Prim shirts and classical coats, the slimmer proportions of trousers toyed with the image of gangly youths. After all, in his personal continuum, it’s clear that he roots for the quiet schoolboys like himself. But isn’t the underdog narrative always the most riveting one?