Saving the best for last, the final day of the Paris haute couture shows was jam packed with impressive collections that explored a wide range of sartorial definitions of beauty. 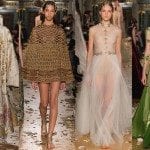 
Since their appointment as the creative directors of Valentino designers Pierpaolo Piccioli and Maria Grazia Chiuri’s work has always had two almost diametrically opposite design aesthetics pulling each collection in different directions. The first path being a celebration of the ornate, where no embellishment is too difficult or too elaborate. The second, an almost monastic sense of purity and reserve. This season those two fundamental concepts came together in a way that wasn’t just harmonious it was almost transcendent.

Taking a page out of the book of Mariano Fortuny the duo created a collection of muses that would be able to haunt the mind long after they faded from view. Virginal maidens that walked barefoot down the catwalk in ivory gowns and golden medallion jewelry woven into the fabric of the ensemble, their hair crowned by a golden serpent circlet.

The graceful fluidity of the hand pleated dresses in rich velvets, chiffon, brocades and jacquards would have looked right at home on the dancers Fortuny dressed like Martha Graham and Isadora Duncan. But that isn’t to say they felt out of touch with the desires of women today.

There is, and will probably always be, a real market for romantic designs that make a woman feel like she is the living breathing embodiment of a Greek goddess. With this collection that woman was spoiled for choice. Each one of the 66 ensembles was a lush ethereal option. Less ornate then past Valentino collection, but no less desirable the meticulous moderation of each pieces was what gave this collection its emotional soul. 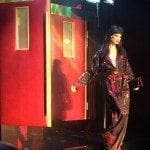 
Edwige Belmore, the iconic model and punk singer who made a name for herself in the 70s and 80s as the Queen of Punk, passed away last September. She was part of the inner circle of artists who frequented the mythic Paris nightclub Le Palace, a group that included Jean Paul Gaultier as well as other of his “first name only” friends like Djemila, Farida, Fredo and Eva. Belmore even walked his catwalk early in his career.

To celebrate her life in style, Gaultier gave her one hell of an homage by recreating Le Palace on his catwalk and putting together a collection that was ready to party. Never has Gaultier’s fun-loving spirit beenmore poignantly put to good use.

His models, with their halos of ratted-out hair, their eyes shimmering with glitter and their mouths slick with glossy red lipstick, took the party atmosphere to heart. As they went in and out of the red swinging front doors of Le Palace to walk down the catwalk, glimpses could beseen of the party going on behind the red leather entrance, one that the audience wanted to be a part of.

Some of the show’s guests actually did know what the inside of Le Palace looked like in its heyday. Farida herself stood up from her front row seat to clink champagne glasses with a model as she walked by and French singer Amanda Lear was spotted lip-syncing to her hit “Blood and Honey” when it began to play on the soundtrack. All the while, a towheaded boy, wearing red lipstick, stood outside the doors to Le Palace, looking strikingly like Belmore who was known for her androgynous style.

As for the clothes, well, they were the perfect updates to classic pieces the girls used to wear back in the day. The shimmering striped pajama suits were a couture version of what a woman might throw on at the last minute in a rush to get to the nightclub, a single-shoulderedsparkling mesh dress with golden leggings most certainly had 80s ancestry and the corseted belts and bras looked like the nascent armature of what would one day become Gaultier’s sartorial calling card.

This was a feel-good collection in a time when feeling good in Paris is a much needed thing. Thank you Jean-Paul for bringing a bit of fun back to France.


The big story at the Elie Saab haute couture show was the shoes. The Lebanese designer did away with the usual high-heeled accompaniment to haute couture gowns and instead paired a large portion of his collection with bejeweled flat sandals and silver lace-up flat boots.

It immediately produced a starkly different show than what Saab’s customers are accustomed to. The models moved with more confidence and power, even in the most shimmering and embellished of ensembles. It was stylistic choice that helped make this show feel modern and directional in a way that was fresh for the house.

Saab also surprised his audience by the manner in which he treated his show’s theme. Usually, when a designer decides to use a place like India as a starting point, it turns into a colorful, highly ornate exploration of traditional dress.

Instead he side-stepped those pitfalls and created a graceful collection that alluded to classic India sartorial styles without over-selling them. The draping of fabric across the body of a dress hinted at a sari, silk trousers came with panels of free flowing fabric falling from the hips and crystal-festooned tops were cut into long tunics that suggested salwar-kameez outfits. All of it came in a calm pastel color palette that also helped to dilute, in a graceful way, the Indian theme.

Saab picked the start of the twentieth century as the time frame for his show. His muse was a Lilah Wingfiled, the Anglo-Irish noblewoman who went to India in 1911 and recounted her adventures in a journal. This Victorian and Indian mix was a delightful idea and instead of looking old-fashioned, the collection had a poetic allure. 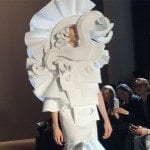 
Last season, designers Viktor Horstingand Rolf Snoeren memorably created haute couture clothing out of painting canvases that were hung on the backdrop wall of their show – frames and all. This season they continued along the same artistic lines by crafting a lineup that explored the idea of dimensionality in design in a surrealist show.

More an art performance piece than clothing designed to be worn, the all-white collection was an exploration of the planes of the face. Think Picasso’s Cubist portraits where no distinctive feature of the face was were it was suppose to be.

The duo recreated this concept on crisp white piqué shirting. Constructed around the body and sometimes over it, totally obscuring the faces of the models, the clothing featured three dimensional eyes, ears, mouths and noses as well as hair and eyebrows – all of the shapes built out from the same white fabric, almost as if the features has been embossed into the garment.

Now that the designers have forgone ready-to-wear to focus their creative energies on couture and their highly successful perfume lines, they look like they are enjoying the imaginative and inventive nature at the core of couture. How else to explain a collection that has a very limited reach into to the real world of fashion?

Viktor & Rolf’s couture wants to remain on a pedestal, reside in museums and live on in fashion photography, or possibly as costumes for an avant-garde music video.  This collection certainly does propel the quirky aesthetic of the house forward and quite possibly help sell a few more bottles of perfume.


The front row of the Zuhair Murad haute couture show was heaving with the designer’s bejeweled, fur draped clientele. If it’s true that there are less than a thousand women in the world who still buy couture regularly, well, it looked like at least half of them are fans of Murad.

This season, the Lebanese designer gave his devotees a collection that ticked all the boxes of their sartorial desires. The gowns were romantic. They were feminine. They shimmered with beading and sequined embroideries. And above all, each outfit was a statement-making design. Murad’s clients have absolutely no interest in blending into a crowd. They want their beauty on display and they count on the designer to make sure that happens.

This season, the title of the collection was “Amour-En-Cage” and much like a beautifully plumed bird placed in a gilded cage, this show was all about framing the female form. Sometimes, this meant stiff stand-away-from-the-body skirts that were, considering the highly reflective mirrored runway, a bit racy. Other times, the caging concept would be the construction of a shimmering bodice of a gown or jumpsuit.

Murad also used the cage idea to create a structured volume, be they asymmetrically undulating skirts that cut up over the knees at the front, only to fall to the floor at the back, or voluminous yards of fabric that would sprout out from the hips to trail behind the models, shimmering on the ground in their wake.

The one thing that the designer didn’t pen up with this show was the beauty of his talent. 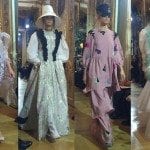 
Russian designer Ulyana Sergeenko was feeling both naughty and nice on the final day of the spring/summer 2016 haute couture shows. On every guest’s seat there was a box of chocolates and a black velvet “Eyes Wide Shut” mask. It looked as if Sergeenko wanted both the trick and treat of a masked encounter.

This queen of the night concepts, who found inspiration in the decadent time at the end of the Russian Empire and the end of the Soviet Union along with the 80s and the world of Madonna and Boy George, made for quite a sartorial mash-up.

The Madonna elements were easy to spot, the black leather caps worn jauntily to one side on the models heads and the bow hand adornments looked like something she might have worn back in the day. The clashing color choices, which had their own garish charm especially when crafted into boundless ruffles on short skirts or dyed cubby fur coats, also felt very much inspired by the look of the 80s.

There was certainly a disconnected decadence about the whole show. The exaggerated shoulders, the embellished wide ballgown skirts in yards of organza or taffeta, the fitted bustier tops that had the models’ bosoms pressed up against the chest, all has a dizzy frivolity to them.

In the end this was an ignorance-is-bliss collection, clothing designed for women who will dance the night away in total oblivion that the world is crumbling around them.