Day two of the Paris spring/summer 2016 haute couture season proved itself to be filled with winning collections. Once again we saw the real world encroaching on the direction designers are taking. But it was two female couture designers, Bouchra Jarrar and Yiqing Yin, that generated the most buzz with their thoughtful, deftly executed lineups. It makes one wonder if it might not be about time that a woman fills the creative director role that is currently vacant at Christian Dior. 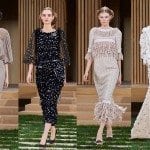 
The garden of a modern and minimalist luxury wood-slat Japanese-inspired home was the backdrop to the Chanel spring/summer 2016 show. It came complete with a manufactured blue sky and manicured green grass lawn. A peaceful and zen-like energy permeated the space and that sensation was echoed in the show’s presentation, which saw models slowly stroll along the garden’s inlaid wooded plank walkway on curved cork wedge heels.

This Chanel woman isn’t in any rush. She has the time to gather up her hair in a croissant-shaped bun at the nape of her neck and craft dramatic eye makeup, that brought to mind the look of Maria Callas, before taking a turn in the garden wearing a slim skirt and a short jacket with rounded elbow length sleeves. After all, this is a woman that people will wait for.

Designer Karl Lagerfeld got the message that couture today must cater to more than life’s exceptional moments. If it wants to have any chance of continuing to survive then it need to adapt and find ways to function outside rarified arenas and move, even if ever so slightly, into the real world. Therefore Lagerfeld produced so much beautiful daywear this season.

Besides the dominant knee-length skirt and rounded short jacket combo, the other major silhouette were full cut silk palazzo pants paired with easy, albeit highly embellished tops. Truth be told, the whole collection was a celebration of the impressive craftsmanship of Chanel’s petites mains. Even a bomber jacket or the hoodie worn by the bride, two very modern garments, got the couture treatment- festooned as they were with shimmering 3D beaded blooms.

The big reveal at the end of the show saw the walls of the three story Chanel model home fold away so that the entire collection could be seen again. But far from looking like a dollhouse, the lineup was more like a graceful hostess inviting the audience into her refined world. 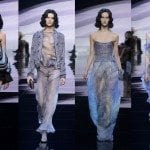 
Two days ago Giorgio Armani launched his New Normal advertising campaign, shot by Peter Lindbergh and featuring four 40-something supermodels. This is a new series of Armani pieces that are a sort of greatest hits lineup of his designs, created to become the staple garments in any real woman’s wardrobe.

Then today, all the way on the other side of the spectrum, was Mr. Armani’s latest haute couture collectionwhere there was nothing everyday or staple. Every mauve hued piece could not be mistaken for anything other than couture.

That being said there was a concerted effort being made by Armani to give the collection a youthful élan. The small-heeled sock boots, shimmering sheer ankle socks worn with clear plastic pumps, the large number of shorts and short skirts all projected a playful naïveté. A sentiment enhanced by the undulating ruffles that accented tops, the cuffs of pants and a large portion of the gowns, and that were furtherunderlined by the wavy Lana Turner locks sported by all the models.

Iggy Azalea certainly looked like a modern day Turner sitting in the front row of the show. And she will probably find a few things in this collection that she would want to wear. As will her seat-mate Charlotte Rampling, who is nominated for an Oscar this year. Decades separate these two artists and yet Armani will surely find a way to cater to both of them.

And isn’t that what the best designers can do? 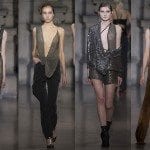 
Designer Yiqing Yin called her spring/summer 2016 couture collection « Blooming Ashes » and asked « what survives when all is gone? » at the top of her press release, then answering « The beauty of the rest. »

It was an interesting premise considering Yin has just been granted the official haute couture appellation, marking her as a fully-fledged member of the rarefied circle that only counts 14 houses, after years as a guest member.

But instead of showing a collection that was a look back on the designs that were at the foundation of the success of her couture house, Yin pushed her concepts forward by proposing many pieces that felt distinctly different from her previous work. The show was a sartorial statement that she had no intentions of resting on her laurels and wasn’t afraid to still take risks and challenge herself creatively.

What this looked like on the catwalk was a lineup of stronger, tougher garments worn by warrior women who were sensually ready for battle in their chain male mesh tops, leather strapped dresses and skin tight leather pants distressed to look as if they had been worn in a muddy skirmish.

There were quite a number of impressive pieces in this collection. A fur dress crafted to suggest the scales of a reptile was a knockout. And one liquid silk gown covered in shimmering rope ties that created a soft and hard dichotomy was another standout.

However Yin’s warriors were also princesses. And as such they were also in need of the beautifully draped, pleated or gathered gowns that the designer floated down the runway.

It’s great to see Yin looking so confident. And just like her final dress that lit up the dark winter night, this designer is shaping up to be a beacon for the couture of the future. 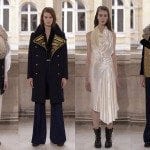 
The distinctive and unmistakable voice of Bouchra Jarrar tickled the ears of the audience at her haute couture show on Tuesday. As she waxed on in French, sounding oh-so-chic, her collection of 21 looks unfurled in front of guests who literally ooh-ed and ahh-ed at the diminutive designer’s offerings.

Jarrar gave her loyal customers more of what they love. Her military-inspired perfectly cut trousers, her backless vest tops — that feature a single strap across the lower back — and her multi-layered perfecto inspired coats crafted from the finest mélange of fabrics and leather. But she also began to branch out of those expertly mastered foundation designs and in doing so, expanded the reach of her brand.

The introduction of more flou creations, such as a cream-colored glossy silk dress that wrapped around the body, or one gently gathered at the neckline that finished in a youthful short asymmetrical skirt, showed Jarrar gamely stepping out of her comfort zone. And she basically nailed this type of clothing construction too.

Fashion critics rarely use the word faultless in their reviews. But this time, it’s the only word suitable to describe Jarrar’s work.