White hot designer Virgil Abloh showed his Off-White womenswear collection for the first time on the official Paris Fashion Week calendar on Tuesday night. Last year Abloh made it all the way to the top eight finalists of the LVMH Prize and his celebrity connections, including his consulting working with Kanye West, has him riding on the crest of coolness. 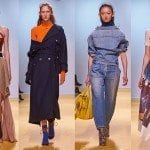 Sufficed to say expectations were high, perhaps too high, for the designer for his first time out the gate. It’s also worth noting that presenting a new collection right at the tail-end of a month of shows that are spread across three continents is never an easy position to be in. You immediately bump against comparisons with every other show that has gone before you.

For Abloh this ended up being the major stumbling block with this show. When his sporty silver jackets worn unzipped and pushed down the shoulders appeared on the runway it was impossible not to think back to the Balenciaga collection a few days earlier. His asymmetrical pleated silk dresses brought to mind pieces seen at Celine. And the elongated sleeves on his white cable-knit sweater could easily pass for something spotted at Chloe or Stella McCartney.

What didn’t look so derivative were the patchwork tops that had a hip handicraft style, constructed as they were from what looked to be a selection of vintage t-shirts. The color-bisected denim designs and the dresses constructed from reproduction canvases of Giorgio de Chirico’s Piazza d’Italia also struck out on an original path, as did the voluminous high-waisted silver pants in look four.

The designer titled this collection “You’re obviously in the wrong place”, a line from the film Pretty Woman. Abloh on the other hand does have a place in fashion. But, like Julia Roberts’ character in the film, he just need to figure out exactly where that is. 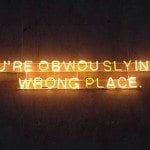