Moschino is a Fire Starter

Jeremy Scott was on fire this Thursday night with a show that was smoking hot. And this being Moschino, it meant the designer’s evening gowns were quite literally puffing out plumes of smoke as the models took their turns on the catwalk. 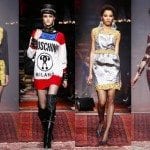 It was an easy gag. Scott scorched his gowns so that they looked as if they’d been strategically burned away, barely rescued from a three-alarm fire. Some pieces survived better than others; one cheeky black tuxedo number had the bum burned out. But, apart from a ridiculous matchstick dress and the now Instagram infamous chandelier ball gown, many of the singed styles had a troubled beauty about them. And without a doubt, the charred clothing in the collection, which ended the show, were its strongest offerings.Before them, it was an overly long lineup of bad-girl biker chick designs going a tad too far off the rails with its blends of leather jackets with bow-covered 80s satin prom dresses, and chain-link skeleton outlines on suits. One notable exception was the opening floor skimming perfecto leather gown, which was tough enough to make it in the real world.This collection was less well-rounded than Scott’s previous work for the house. Maybe he got just a bit too much smoke in his eyes this season to see clearly.