On the first full day of Menswear in Milan designers showed a particular proclivity for embellishments. Fall/Winter collections tend to favor dark hues and thick fabrics, but this season those fundaments were elevated by a considerable amount of crystal beadwork, metallic embroideries and metal hardware appliqué. 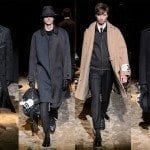 After years of showing in cavernous locations designer Stefano Pilati decided to enclose his powerful menswear skills in a much more contained and intimate setting. Shown in a round, with coliseum gilded seating and a matching fur lined runway, the Zegna collection took very much to heart the idea of creating couture clothing for men.Minus any pomp or circumstance Pilati began his show without changing the music from what was being piped in as the audience took their seats at the show. Almost as if the first half a dozen muted hued looks were being worn by chic late arriving guests.As each model walked by, their look number added to front of a fedora, worn at the cuff or across the top of a tie in playful nod to couture shows of yore, it was Pilati’s diverse embellishment that made this collection come together.The understated color palette of blues, grays, browns and blacks were quiet backdrops to charged jacquards, perforated patternwork and color blocking. But it was when the designer introduced his slouchy tailoring with pleat fronted pants and crystal embellishments that this show really picked up steam.The controlled way Pilati covered a cashmere sweater with pinpointed embroidery, placed a touch of bugle beadwork stripes on a shirt’s cuffs and sprinkled crystal highlights on an abstract pattered polo top kept the looks feeling masculine. Although women are going to want to get in on the sartorial action this show offered.And a shout out must be given for Pilati’s choice to craft his sweaters with zippers at the back of the neck. Left open and shimmering, the zippers created a cool casual cowl effect at the front and exposed a sexy slice of skin at the back.These were the must have pieces of a gracefully strong show. 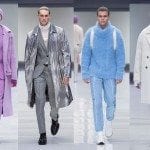 Donatella Versace is ready for lift off. The Italian designer looked to the stars for inspiration for her fall/winter 2016 menswear collection and produced a pretty heavenly line-up.Set inside the spaceship looking MiCo-Milano Congressi, the largest convention center in all of Europe, the show was lit up by low-hanging, ever-shifting neon lighting and a seating plan that looked like intersecting V’s (for Versace). The futuristic fashion vision started off strong, as the room went dark and a series of looks pierced the darkness as the models took to the catwalk at a sprint, their outfits crafted in light capturing fiber optic fabric.

Versace smartly side-stepped a beefcake Starship Trooper vision of the future in favor of one that was more of a blend of Gattaca and the last third of Inception. Cool crisp suiting in icy shades and ski gear inflected styles, crafted from metallic-coated luxe materials or cut in Versace’s beloved purple, had an instant intergalactic cool.It’s true that many of the flashier pieces were perfect Instagram fodder. Count on the coats covered in bits of metal gears and cogs, the crop leather top festooned with aerospace patches and the celestial silk printed pieces getting a lot of coverage. But more universally appealing were the delightful overcoats stitched with a delicate star pattern on the sleeves, the classically beautiful bombers and the white perfecto jackets. This is where this collection rocketed to the future.This season Versace’s men in space were out-of-this-world appealing. 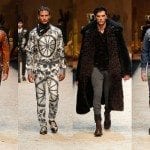 Picking up where the last Dolce&Gabbana womenswear show left off, the male models of designers Domenico Dolce and Stefano Gabbana spaghetti western inspired fall-winter 2016 show were given the task of filming (instead of photographing) their turns on the dry dirt catwalk. The goal being to create a sicilian western film, broadcast live on screens in the show space and on the brand’s social media sites.But while there had been quite a lot of good will from the audience during the womenswear show, this time there was a sense of unease about it all, feeling more a distraction than a whimsical addition.Putting aside the gimmick social media element of this show, the collection itself felt a bit less organic in its execution of the designer’s chosen theme. Yes the sheepskin pants were fun, as were the top stitch detailing on tailored suits and the retro western printed silk numbers. But how did the image of a kitten embroidered on a denim jacket fit into the scheme? Ditto the inclusion of leather biker jackets – although they did look cool.So far in Milan, we have been seeing quite a lot of embroidered embellishments being offered for men. This is one field where the designer duo have a long standing claim. As a result, their beaded pistol covered coats, 3D horseshoe motif tops and playful western cartoon character appliqué were all beautifully executed.This show might not have come out guns blazing but it will certainly keep the brand’s home fire burning during the next fall-winter season. 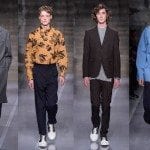 On the Marni catwalk designer Consuelo Castiglioni was intent on giving her men some room to breath. Hers was a collection filled with precision volume that found the sweet spot between envelopment and oversized.

The clothing, in Marni’s uniquely and oddly endearing color combinations of burgundy, mustard, olive, brown, gray and blues, was poetic in nature. Shirts gathered in little pleating at the neck revealed themselves to have a bow string tie at the collar and buttons down the back. Shirtsleeves were designed to pool at the cuffs and peeked out from wrap around coats, while trousers rounded out encircling the legs only to be tethered to the ankle with a fitted strap. Then there was the charming suit jacket crafted to look as if the forgetful model had worn it inside out in error.

Prints were kept to a minimum, with a bold tulip motif making the biggest impact. And fur too, was also used sparingly this season. It was almost as if the designer wanted to create an easy to process collection that’s laid back approach would calmly work it’s magic on a modern man’s wardrobe. 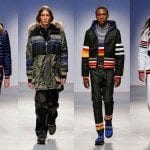 The delightful surprise of the day came from the debut collection of menswear designer James Lang at Iceberg. Urban, cool, young and colorful, Lang’s sporty propositions were instantly appealing.

“It was really about resetting the history of the brand,” said Lang. “Is got such a wonderful history of pop art, color, sportswear and knitwear and I have just really come on to continue that revolution.”

There was little not to love about this playfully infectious offering. From the retro rainbow details on the cuffs and collars of bomber jackets and the sharp color blocking on outerwear to the striped knits and the graffiti Mickey Mouse motif tops, this collection was clean, coherent and clever. 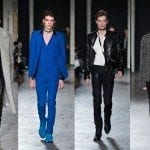 Backstage at the Costume National show the mood board featured prominently a photo of David Bowie and the name of his classic tune “Under Pressure” was the title given to the collection. Bowie’s influence is popping up everywhere on the menswear circuit since the artist passed away a week ago. But designer Ennio Capasa’s fascination with Bowie isn’t a recent occurrence. His sleek urban style, and perchance for statement color suiting, have often felt in keeping with the musician’s sartorial esthetic.

But this season it was the title of Bowie’s song that sparked the collection. “We are living now in a moment of ‘under pressure’. The brands are under pressure, fast fashion is vampirising designers and there is just something strange going on in fashion right now,” said Capasa backstage before his show. “ My answer always to this pressure is creativity”.

On the catwalk that creativity stayed the sartorial course Capasa has always traveled. The one where rock and roll cool musician meet rebellious urban youth. Who else but a nonconformist would wear a suit cut in “The Riddler” green, a impressive bomber jacket decked out with silver beading and a selection of liquid velvet scoop neck tops.

This collection didn’t so much break new ground as it offered up solid pieces to perhaps replace those Costume National designs that need to finally be retired after years of use. 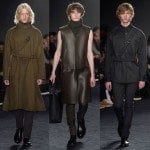 It’s true that men do love their uniforms. Both literally in the military sense of the term and figuratively, as in each man finds the clothing uniform that he feels most comfortable in and sticks with it for decades. On Saturday designer Rodolfo Paglialunga made his argument for a new sort of urban uniform. One that featured quite a few straps, harnesses and belts.

But instead of then giving this rather muddy hued collection a sense of structure and rigor the designs seemed hemmed in. In particular because of the roomy proportions that Paglialunga implemented. Instead of looking like invitingly protective clothing the pieces were insular and felt unapproachable.

Where things got a bit more intriguing was the fabric treatment of a pixilated grid-like pattern on an oversized coat, vest and suit or the juxtaposition of matte and shine textiles on a padded top. But overall this collection didn’t make a very convincing case to take up the new Jil Sander uniform. 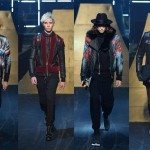 You have got to feel for the guy. Philipp Plein had big plans for his menswear show on Saturday night. There was a live orchestra playing the soundtrack to Star Wars, a high flying video was projected on a three storey structure and even more high flying skate boarders and BMX bike riders performing down the center of the show space. Unfortunately Lil Wayne turned into a big diva when a faulty microphone enraged the rapper to the point that he stormed off the stage just minutes into his performance…not to be heard from again.

Once the clothing came out, Lil Wayne’s childish meltdown was forgotten. Instead fans of brand are only going to remember to pick up one of Plein’s quilted leather skateboards, that they will slot into their new studded superhero spray painted backpack which will be worn over their zipper embellished black leather jacket.

This was a collection for cool urban rich kids who love to look rebellious and street savvy, but only in the finest Italian made designs. For as downtown as this collection was designed to look, there was no denying its up town attention to details, high end craftsmanship and quality materials.