It had been a long time coming but on Friday afternoon, after fifteen years working at Fendi, designer Marco de Vincenzo finally presented his first signature handbags to the world. 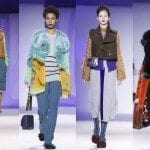 You couldn’t miss them. And considering his collection had quite a lot going on this season, that is saying something. But there they were, with their distinctive pudgy silver-clawed paw shape, being worn with almost all the looks and in every possible color of the rainbow (a de Vincenzo hallmark). They fit right in with this raucous collection that was, with its bright clashing prints, use of tinsel-like Lurex and an abundance of what could only be called fun fur, the sartorial equivalent of artificial flavoring. Everything about this show was off the wall, cartoony and fake, just the way de Vincenzo wanted it. There is no question now in anyone’s mind that this is a designer who is believed to be one of Italian fashion’s next leaders. The investment by LVMH in his brand certainly proved he has some big gun support. And by producing such a decisive “balls to the wall” collection, he underlined his desire to shake up the status quo of quintessential Italian style. It’s good that de Vincenzo continues to push himself. But this season, his collection ran the risk of putting his brand in a diabetic coma. It was just keyed too many super charged ideas. Among all that agitation the connection to the core identity of his brand became frayed.