Following the Paris Fashion Week trend of smaller or more intimate sets for big fashion house shows, designers Humberto Leon and Carol Lim refrained from presenting their latest Kenzo collection in a giant pavilion or hall setting, as they usually do. Instead they invited the fashion set to the Salle Wagram and then proceeded to make this more traditional location feel even smaller by breaking it up into walled-off sections. 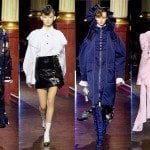 he show began with a video of a colorful digital keyboard playing the « Star Spangled Banner ». Suddenly, some sort of software virus infected it, speeding up the song until it became a visual and aural kaleidoscope, full of color and sound.

The experience was jarring but was maybe just to prepare the audience for what was about to appear on the runway.It was a lineup filled with clashing prints and odd proportions. The phrase “milkmaids go to a rave” was written in my notebook as a way to succinctly describe the clothing passing before my eye. Glam rock tiger and zebra-stripe prints in caustic tones of purple, orange, yellow and pink were worn with oversized ruffled prairie dresses and tops in windowpane patterns. Tiger faux fur jackets did battle with velvet (or was it velour) triple-waisted pants for the « Most Garish » prize of the show. Although some iris motif sequined or patent leather dresses came in a close second.It was evidently that the kitsch element was intentional but it was unclear as to why. And that is the reason this brash and boisterous show fell flat. There were sparks of a good idea here and there. The extra-long accordion pleated sleeves being one of them.

In the end it was the quieter designs that made the best impression in this collection. The 50s-style roomy rounded denim pants and jackets, the maxi dress with smocking across the torso and knitwear pieces with bright squiggles of fabric embellishment all had room for more exploration.