Once again, with a budget of maybe a tenth of that used by some of the big name brands, designer Iris van Herpen came up with a show concept that was one of the most creative of the entire Paris Fashion Week. The Dutch designer explored the idea of dimensionality and breaking through the fourth wall to bring her audience into her world or, if we are being honest here, having her world invade our own. 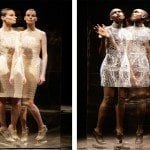 To express this idea she stood her models in front of panels of translucent plastic that distorted and multiplied their reflected image so that sometimes two (or three) different versions of the same model would appear through the screens at a time. It made for a slightly spooky show with one journalist name-checking the horror film “The Ring”, which features a girl crawling out of a television set to wreak havoc on the living.

Van Herpen admitted that the show got its start in the idea of lucid dreaming and being able to control that magical space to mold it to one’s wishes as opposed to helplessly following where it takes you. And what the designer has conjured up from her own fraught dream state is a collection filled with neo-futuristic architectural designs (think the Oculus building in New York) that surround the body. Garments crafted from high tech materials that look like 3D printing schematics brought to life.

Van Herpen might have dreamt up this collection as she was drifting off to sleep, but today she woke the world of fashion up to an innovative version of poetic dress. 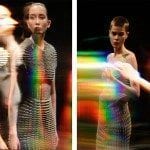 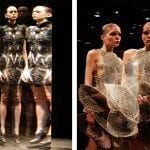