For his sophomore show at Iceberg Arthur Arbesser turned to the dramatic work created by a group of architects that first made its mark in the 1960s, called Superstudio. Their claim to fame is an imaginative use of symmetrical grid lines and geometric shapes. 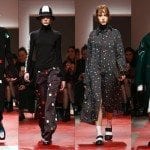 Arbesser bound this idea to a club kid vibe by repeating the grid pattern on woven knitwear, rabbit fur squares and outsized plaids in hot house colors like fuchsia, Fanta orange, and fire engine red. The addition of lots of Iceberg logo branding as well as some retro Run DMC bucket hats helped to give this collection some good natured urban angst as did the 80s style sleeping bag nylon coats or those in cut in colorful faux fur.

Oh and a (bucket) hat tip must be given to the knitwear tops and bottoms that had sleeves sprouting out at the waistline. They were tied in the front like the vestiges of a hoodie or sweatshirt that had been cinched to the body. It was a very clever way to give this show another layer of streetstyle flair.

It was interesting how the designer was able to take that one central, and some might say limiting, grid pattern idea and extrapolate it out in so many different ways. He really grabbed the concept and wrestled it to his will — not an easy task with such a potent leitmotif.

It looks like Iceberg is now in good hands with Arbesser.