During the Gucci menswear show in January, designer Alessandro Michele obscured the catwalk with a smoky haze. Today for his womenswear presentation, he placed a gossamer screen between the audience and his offering. So backstage the first question on everyone’s lips was why he had intentionally made it difficult to photograph (read @Instagram) his collection?

A look of total surprise crossed the designer’s face as he innocently and apologetically said, « I’m sorry. I didn’t think about it. But it’s true! It’s better because it’s like spying, no? That is why I put this kind of film, because when you look at something beautiful you have something like a filter in your eyes. It’s not the same for everybody ».

But Michele’s fashion filter went even further. He also created a primal thumping soundtrack and light show that was accompanied by backdrop images of exploding volcanos, floating feathers and slow motion spinning flower branches. « It was the sensory idea of beauty. It’s like a heart that is pulsing, »‘ the designer explained about the inspiration for his scenography.

This all-encompassing concept fitted in nicely with the designer’s sartorial philosophy. His path is one of evolution rather than revolution. Michele isn’t interested in hoping from one theme to something completely different the following season. When you buy one of his Gucci designs, you become a part of his world, his tribe, a gang that is looking to jump in new members all the time.

Michele’s calculated progression worked in his favor right from the start of the show when he opened his collection with a pristine white trench coat with leg-of-mutton sleeves. A clear statement that, as much as he loves to mix and match colors, motifs and embellishments, he can also reign it in and give Gucci fans something gracefully understated.

The rest of his lineup felt more in keeping with Michele’s vibrant vintage predilections. But the sequined snakes on tulle dresses, trompe-l’oeil ensembles and ruffled knitwear were given a streetwise edge. The spray paint effect on a Gucci bag that was tagged by the artist Trouble Andrew with the word « real » in DayGlo yellow, a flaming red fur coat with a graffiti style diamond embedded into the pelt at the back and the endless array of pearl-adorned brass knuckles worn by the models toughened up Michele’s romantic notions.

The designer titled the collection « Rhizomatic Scores », which was defined as something that « has neither a center, nor orientation. It develops disorderly ». It’s a description that could also be used for Michele’s body of work so far. Disorderly, but with clear development. 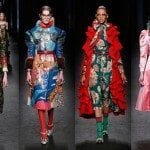