There was a lot of speculation about the set of the latest Givenchy show. Some guests saw the zigzagging blond wood walls and immediately thought of a labyrinth. Others suggested a mouse maze. One even went a bit dark and said it looked like the chute of a slaughterhouse. 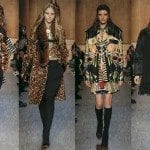 But perhaps the most interesting aspect of this particular set was how it could be a way to return fashion shows to their intimate setting of old. With so many twists and turns, it was impossible to see more than two dozen people at a time. The focus was no longer on the celebrity guests or an elaborate set design; it was squarely back where it should be – on the clothes. And with such close quarters, everyone was given a front row seat, making it that much easier to appreciate the collection.Once the show finally started, almost an hour late, the thinking behind the maze became clear. Designer Riccardo Tisci turned to Egypt and all of its unmistakable hieroglyphics to create a lineup that had a graphic and symbolic power well matched to his preferred Catholic iconography.

Tisci’s Cleopatra’s are just like their namesake – not to be messed with. They take their Eye of Horus outfits and up the ante further by incorporating snake skin skirts and boots, coats in felidae spots and black bomber jackets, their zippers adorned with gold coins (perhaps as a payment to Charon to cross the river Styx). Running alongside all of the Egyptian mythology references, Tisci added in a military element. He created brightly colored dress coats and jackets that he layered on top of one another for a colorful, yet formal fashion alternative.Perhaps then was the maze meant to represent the complex paths constructed inside the Egyptian pyramids? Everyone knows that only a choice few ever find their way back out again. I am guessing that only a person daring enough to wear hieroglyphics, animal prints and military jackets together would have the strength of character and self-assurance to make it out alive.