When we are young, it is perfectly normal to want to break free from the confines of family traditions and step out of from the shadow of past generations. That separation is also what makes it possible, when maturity sets in, to finally return to one’s roots with the wisdom that has been accrued over the interim years. 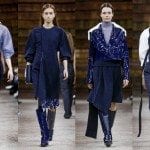 This was the situation Gabriele Colangelo found himself in on Saturday afternoon with his fall/winter 2016 collection. His family is in the furrier business and this season, he finally decided to celebrate that fact with a lineup filled with pelts created in his family’s factory. « To me the challenge was to translate the fur to minimalistic codes, » said the designer in a preview of the collection. « Usually Italians like their fur big, » he added with a smile.The years Colangelo spent visiting his father’s factory growing up certainly paid off on the catwalk. His chosen technique, laser cutting pelts so they stretched and subtly elongated almost like knitwear as the models walked, gave his designs a sense of movement and lightness. Another clever idea had him seamlessly blending sheepskin with mink in different lengths on outerwear to give an alternative interpretation of undulating movement.Besides embracing fur, Colangelo turned to the work of modern artist Christian Maychack to induce an organic three-dimensional approach to his construction. Meaning that all of his asymmetrical skirts with free flowing panels of fabric, scar-like raised stitch work adornment that sliced across the sleeves of a patent leather coat or along the shoulders of a rounded full sleeve top as well as some raised geometric pattered silver bugle beadwork combined to create a minimalistic yet elemental elegance.This collection was a beautiful homecoming for Colangelo and one that underlined the depths of his talent as a modernist fashion designer.