Those who have been traveling hither and thither to one show after another here at New York Fashion Week got a less then subtle sneak peek at all of this season’s Jeremy Scott kooky prints. 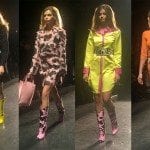 The Los Angeles based designer coated a fleet of Lexus courtesy cars in one fun loving print each. Fashion insiders therefore have been traveling around all week in luxury cars tricked out in cow spots, day glow red and yellow zebra stripes, miniature pink Bette Grable pinups and musical note prints. Lined up conga style outside his show’s venue they brought a smile to the lips.

And that is all Scott really wants to do. Make people smile, remember their childhood loves (yes that was a knit dress featuring the Saturday morning cartoon characters Ren and Stimpy on the catwalk) and have fun with fashion.

But it would be a mistake to think that just because his form fitting dresses are made so that the model’s bodies look like the curves of a guitar or his mohair tops feature colorful cosmic planets that Scott is skimping on technique or quality materials. Case in point an outfit covered in what appeared to be a print of a colorful plastic ball play pit. But as the model got closer each one of the dots was a 3D appliqué. And a skirt that was covered in plastic prizes you might end up with after turning in all the tickets you won playing Skee Ball at Chuck E Cheese was constructed to last.

The models, with their Barbarella hair and their Earth Girls are Easy makeup, looked like they were having a blast playing dress up in Scott’s get ups. And as Debbie Harry saint telephone on the soundtrack the audience mouthed the lyrics and tapped their feet. Looks like feel good fashion can be about more then great fabrics.