Designers Den and Dan Caten kicked off the final day of Milan Fashion Week with a collection that was a unusual hybrid of strong sartorial references. The duo behind Dsquared2 decided to create a fashion mash-up of military garb, samurai attire and Victorian vêtements. It was a combination that, as hard as it may be to believe, worked rather well. 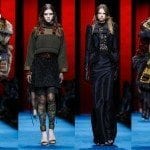 The juxtaposition of hallmark design elements from the three styles created a modern warrior woman who is no-hold-barred when it comes to her clothing. Her fashion armor consists of layering pieces to create a sense of structured volume on top, balanced more often then not by low cut jodhpur pants in a camouflage print or army shades of beige and olive. The mélange of tailored jackets with dashing livery stripes and big brass buttons with lace ruffled shirts and a undercoat of a tattooed body suit made for a very rich visual.

The samurai element of the show tended to favor the accessories with broad leather panel collars and wide obi-esque belts. They were also represented in the colorful maxi fur coats crafted to give them the primitive yet ultra-luxe mien descended from the fur coat the duo introduced this time last year.

Truth be told, the entire collection felt like it was a scion of the previous winter collection. Not that this is necessarily a bad thing. For designers who are known to hop from one playful theme to the next, it is nice to see them drilling down a bit more into core pieces for the house and seeing just how far they could take them.