When Lucie Meier and Serge Ruffieux, the dual heads of the Dior design team, presented the brand’s haute couture collection in January, the chief reproach critics had was that the designs hewed too closely to ready-to-wear. Now, just about a month later, that admonishment has turned to admiration. The couture weakness became a strength as the duo’s Dior offering today was filled with pieces that will easily fill the brand’s coffers while still maintaining some of the distinctive codes that their former leader, Raf Simons, laid down during his brief tenure. 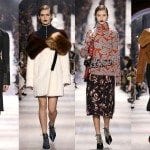 So what sells in winter? Why, great coat and statement bags bien sûr! And this show had them both in spades. There were so many new bags designs that models were often « forced » to sport two or three at a time. The most interesting one was a portefeuille version that was left open to flap against the models’ legs.

The coats, on the other hand didn’t need any support. They had a dramatic modern flare that made them instantly cool, be it the bold color options (orange, pea green , robin’s egg blue) or the clever construction flourishes such as the way a scarf collar would tie stiffly at the neck, how sleeves featured ties at the wrist to gather in the cuffs or the faux effect of a dark fur coat sliding off the shoulders but in actuality had a white fur neckline.

In a follow-through design feature from the couture show, the shoulders once again became a focal point. The designers created a peeled-back effect on floral dresses. Flaps of fabric were turned down  at the shoulders and were embellished with blooms in a pleasingly dissonant color and pattern. That idea also translated to the fur coats, again around the shoulders, different pelts were used to create a chic contrast.

This was a sold show that successfully walked the tightrope of being respectful of a brand’s past while ever so gently suggesting a few sartorial updates. 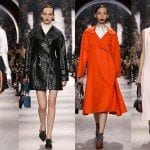