In the show notes of his Fall 16 collection, Derek Lam namechecked Richard Avedon and Alexander Calder as masters in « capturing graphic movement » and Penelope Tree as his stylistic muse. It made for a great combo that produced a strong collection filled with covetable outerwear and original yet tasteful pieces designed to make a girl feel instantly special when she slips them on. 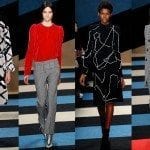 Lam continued to mine his favorite decades (the late 60s and early 70s) this season but he did it in a featherlight way. Only the Victorian —by way of the 70s — blouses, the knee-high leather boots and the earthy color palette really pointed a strong finger at his retro leanings. Otherwise the collection had a sophisticated contemporary vibe.

The graphic delineation on fur coats and knit dresses made for some eye-catching looks. Elsewhere, the duffle coat toggle closures on sleek outerwear, from capes to jackets, deftly broke up the sharp lines of the designs. The finale of beaded dresses, along with a pair of fluid cream and white silk jersey numbers, featuring smocked or pleated bodices, were modern classics in the making.

This was a fine show from a designer who looks as if he is hitting his stride.