Courrèges Heats up the Future

The future. This is the essence of the Courrèges brand. And now, in the hands of Sébastien Meyer and Arnaud Vaillant, the house’s future is also looking very bright. 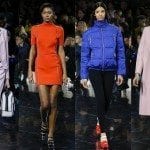 The duo once again brought the fashion world to an amphitheater inside the bowels of the Bastille Opera. Using the same formula as last season, they projected spinning three-dimensional images of the clothing the models were wearing on a giant screen behind them. In that way their details could be appreciated concurrently while watching how they interacted with the female form. The clothing was sleek, mod, minimal and bright. All things you would expect from a house like Courrège, which has such a recognizable design DNA.

Happily woven into what was expected were interesting new design signatures. The horizontal three-button closures on tailored jackets. Skinny pants in vibrant degrade color washes. Pocket flaps fitted to the lower back of jackets. And coolest of all, the doubled up shirt and pant ideas. Meaning a shirt was designed to look like it was two individual pieces while the top layer of the pants was crafted to be worn unzipped to show off an underlying waistline. All of these construction concepts are clever ways for wearers to signal to the world they are wearing Courrèges, no logo needed.

But some of the most modern aspects of this show couldn’t be seen on the catwalk. The fact that a selection of the pieces have built-in wiring, making warming the garment up possible, which could come in very hand next winter. And, in keeping with the « see now buy now » trend, the duo also announced that a third of the collection will be immediately available for purchase.

It was lovely to see the designers really trying to shape, in a thoughtful and considerate way, what the next chapter of fashion will look like. Now if only there had been free Courrèges wifi put in place at the subterranean show. There is nothing modern about being disconnected from the world when you want to bombard social media feeds with all the fresh ideas the French brand has to offer.