Cedric Charlier really got his sartorial sea legs this season with a strong collection that took its inspiration from the always chic mariner style. 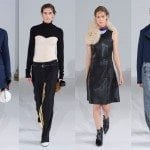 « I started by looking at old photographs of sailors, » said the designer backstage after his show. « And I wanted to explore this idea of ‘girls by the sea’ and moving them to into an urban world by taking the iconic codes and updating them with my own cuts ». Charlier launched his eponymous brand four years ago and has proven himself to be a talented designer, if one still looking to completely nail down his signature codes. Today he came much closer to attaining them with a great selection of outerwear —duffle coats, pea coats, rain coats — in more saturated versions of the classic navy blue, yellow and red shades associated with seafaring garb, which gave them bracing freshness. Also his use of big buttons, to attach a knit top to a matching skirt, or give an update to the classic flat-front sailor pants helped make his collection feel modern and not derivative.

Traditional striped sailor sweaters became elongated in Charlier’s hands and by crafting them from a shimmering Lurex fabric he was able to transform them into casual cool evening attire. And for those looking for something even more glittery than the silver sequin-covered pieces that looked like the sartorial equivalent of sunlight sparking off the ocean waves will certainly float their boat.