There was a lot of hide-and-go-seek going on at the Balmain show on Thursday. Before designer Olivier Rousteing even got the show underway the audience was left waiting for a late-arriving Kanye West who, once he finally did show up, kept his head down and hid his face deep inside his pearl and gold brocade beaded hoodie. 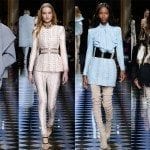 Then on the runway the first model on the catwalk bore a striking resemblance to Kim Kardashian during her blonde phase last year. Wait. Hold the phone. That’s her half-sister Kendall Jenner in a Kardashian- curves enhancing icy blue opening outfit. She was quickly followed by bestie supermodel Gigi Hadid in a long brunette wig that made her almost unrecognizable… for about five seconds?Why all the subterfuge?Who knows…maybe it was just one more clever way to generate new social media buzz about the brand. Rousteing certainly knows how best to generate that.But put aside the celebrity front row and fashion models, and the collection itself, although pretty typical Balmain fare, had a more subdued look about it. This is probably all down to the designer’s use of girly, sugar sweet pastel colors for this ostensibly winter collection. Also the choice to use suede instead of leather for his second-skin pants and curvaceous skirts or dresses gave the lineup a softer vibe. The designer even pulled back a bit on the fringing, concentrating on tassels and soft ruffles to give movement to his highly structured garments.At the end of the day, what this show proved is that it is absolutely, one hundred percent impossible to ever go incognito while wearing Balmain. And that, ladies and gentlemen, is exactly what women who want and can afford the brand require.