Each season the Anrealage show gets it geek on with garments that hard wire a digital component into their conception, transforming each piece into something that looks like fashion from the future. This time designer Kunihiko Morinaga took on the haunting beauty of snow — not the stuff that falls from the sky in winter, rather the image that appears when your television set is on the fritz — as his starting point. 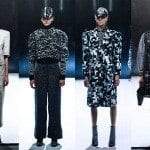 This white noise was cleverly harnessed by Morinaga. Its spooky connotation were examined closely and finally made meaningful by coding the salt-and-pepper static so that beautiful graphic patterns would come to life before the eyes of the audience.

But before he got to this section of the show the designer proved that he is not just a one trick pony by starting of his collection with pixelated pieces, often in broad stiff shouldered boxy shapes to suggest 50s era televisions sets, that were extremely impressive in their construction. To get the snow effect just right for each look Morinaga would come at it in different ways. He would offer up a patchwork design from 1,000 pieces of fabric for his first two sculptural looks. He would weave jacquards into the noise pattern or print it directly onto artificial leather.

Then the “coded dresses” came out. When they appeared inside the square central white space that was cordoned off by walls of finely-lined transparent PVC the models would press themselves up against so that the the audience could see how the binary coding built into the interaction between plastic and fabric would create patterns as the models moved.

This immediately begged the question, “What do I do if I can’t carry a wall of PVC plastic around with me to show off this effect to all my friends”? Ahhhh well, Morinaga thought of that too. He constructed his final pieces with PVC overlays that stylishly covered parts of the garments. Voila, problem solved.

As conceptual as this collection was, the clothing didn’t have to reveal its hidden abilities to be appealing. Take away the noise of the show and the garments will still have a lot to say to consumers.