It is time, ladies and gentlemen, for Joseph Altuzarra to have his Oscar moment. The designer has long been beloved by fashion’s most influential followers and has, over the past few seasons, been on quite a creative roll. But now is the moment for him to break big and become a household name that can be pronounced by every Suzy Homemaker on the planet. 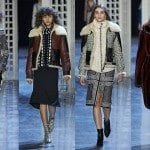 And with his latest collection he really has a shot at making this happen. If stylist-to-the-stars Rachel Zoe, who was sitting in the front row doesn’t snap up one, if not both, of the final two shimmering metallic sequin-covered handkerchief-hemmed gowns, then she has lost a step. Both of those gowns were screaming for their big red carpet moment.

Other than the fantastic finish to his show Altuzarra had a lot of other pieces not destined to awards ceremonies for major consideration. Inspired, if ever so lightly, by the Jim Jarmusch vampire flick starting Tilda Swinton “Only Lovers Left Alive”, the collection channeled more the main character’s fascination with the world than her sartorial leanings. This resulted in a lineup that was also captivating in its own way, a mélange of different ethic reference points, prints, colors and textures that could – through the designer’s now signature fitted jackets, pencil skirts and tailored pants – be immediately identified as an Altuzarra design.

All of it felt in equal measure new and familiar, which makes any garment just that much more attractive. When you can understand this at a fundamental level and yet still find clothing to be original in a collection, this shows a designer who is working “in the zone”.